This fall, you can enjoy your favorite corn mazes, pick-your-own-fruit and vegetable activities, hayrides and haunted houses, plus farmers’ markets and craft beverage trails in New York State.

“New York State’s amazing outdoor attractions and recreational opportunities are a boon for families and communities during the fall season each year, and we want New Yorkers to be able to enjoy this time with their family responsibly and safely,” Governor Cuomo said. “The new guidance announced today will ensure that these businesses can open to the public, allowing families to enjoy their favorite fall activities while providing a boost for our farming communities and local economies.”

“As one of the nation’s top agricultural states, New York traditionally comes together in the fall to celebrate the harvest—from apples to grapes to pumpkins,” State Agriculture Commissioner Richard A. Ball said. “This year, while things may not look exactly the same on your favorite farm, I am happy to say we can still celebrate agriculture’s bounty and the many family-friendly activities that go with it. With this new guidance, we hope New Yorkers will be able to enjoy some of the best of New York agriculture in a safe and socially distanced manner.”

The businesses that can reopen are subject to Low Risk Outdoor Arts and Entertainment and Public Transportation guidance. Guidance includes, but is not limited to:

Petting zoos are not permitted.

The New York State Department of Agriculture and Markets has issued a full slate of guidelines for the agricultural industry, including guidance for farmers’ markets and for its food and beverage producers. All guidance can be found at https://agriculture.ny.gov/coronavirus.

Governor Andrew M. Cuomo announced the installation of an illuminated fountain on the Cayuga-Seneca Canal in Seneca Falls as part of the state’s programming commemorating the 100th anniversary of the ratification of the 19th Amendment. Placed just offshore from where the first Women’s Rights Convention was held in 1848, the fountain is a joint initiative by the New York Power Authority, Canal Corporation and Seneca Falls Development Corporation offering New Yorkers a way to celebrate New York’s role in the suffrage story and our state’s history of bold women visionaries.

As part of the New York State Canal system, the Cayuga-Seneca Canal was integral in not only transporting goods from the Atlantic to Western New York, but in connecting people and fostering the spread of progressive ideals – from women’s rights to abolition.

“It was here in Seneca Falls that New Yorkers came together to demand equal rights for women under the Constitution, drafting their Declaration of Sentiments that solidified the focus of the suffrage movement,” Governor Cuomo said. “This new symbol serves as a tribute to all women who have persevered in the fight for equality; and a reminder to all of us that we still have work to do to fully achieve equality for all.”

On display daily from September 2nd through September 8th, the illuminated fountain will spray water 80 feet into the air over the Cayuga-Seneca Canal and each evening beginning at 8:26 pm, the fountain lights will cycle through the colors of purple, white, and gold to signify the centennial of the 19th Amendment.

“Today we commemorate New York women who challenged their place in society and paved the way for future generations to be active and more equal participants in our democracy,” Lieutenant Governor Kathy Hochul, Chair of the New York State Women’s Suffrage Commission said. “The brave suffragists who stood up, spoke out and demanded change made it possible for women to vote and run for office. The actions of these women and countless others are why I am proud to stand here today, representing the great State of New York. As the birthplace of the women’s rights movement, we must uphold their legacy and continue our fight for equal rights and opportunities for all women.”

The fountain features a pump from the largest pump manufacturer in the world—ITT Gould Pumps, founded just months before the first Women’s Convention, and still headquartered in Seneca Falls.

Events and activities highlighting how the state’s canals shaped our nation’s history continue through New York’sReimagine the Canals initiative, a plan to transform the iconic waterway, encourage new visitors to explore recreational and cultural attractions, and improve resilience and economic stability for communities along the entire Canal system.

New York Power Authority President and CEO Gil Quiniones said, “Many of the 19th Century’s most influential social reform movements flourished along the banks of New York’s canals, especially in Central and Western New York. As the stewards of the historic Canal system, we celebrate its role in historical movements, like women’s suffrage, that make us proud to call New York home. We are committed to not only upholding the legacy of our early trailblazers for the rights of women but building on that movement and fostering a more inclusive and just state for everyone.”

Quiniones also highlighted the New York Power Authority’s Women in Power initiative, an employee-led group focused on gender equality, diversity, and inclusion in the workplace—fostering a supportive network for women through mentorship, education, and events, such as an upcoming forum on the progress of women in public service.

Director of the New York State Canal Corporation Brian U. Stratton said,”Today we celebrate the long-standing fight for equality and the beliefs that flourished and flowed along the Cayuga-Seneca Canal to the far reaches of the entire Canal system. At a time when communities across New York State and the nation are again seeking new ways to promote equality and spur change, we are proud to reflect on the storied history of this great waterway, and its role in the long fight for progress.”

Board Chair of the Seneca Falls Development Corporation Joell Murney-Karsten said,”The Seneca Falls community is proud of our rich, empowering history that draws visitors from across the world to come experience this storied place. Today’s dedication celebrates our role in American history, but also inspires us to look forward, to explore new ways to tell our story, and invite new residents and businesses to join us in this beautiful Town along the Canal.”

In addition to viewing the fountain, visitors to Seneca Falls may also kayak for free along the Cayuga-Seneca Canal through Labor Day as part of the NY Canal Staycation campaign. They may also visit the nearby National Women’s Hall of Fame at the Seneca Knitting Mill. 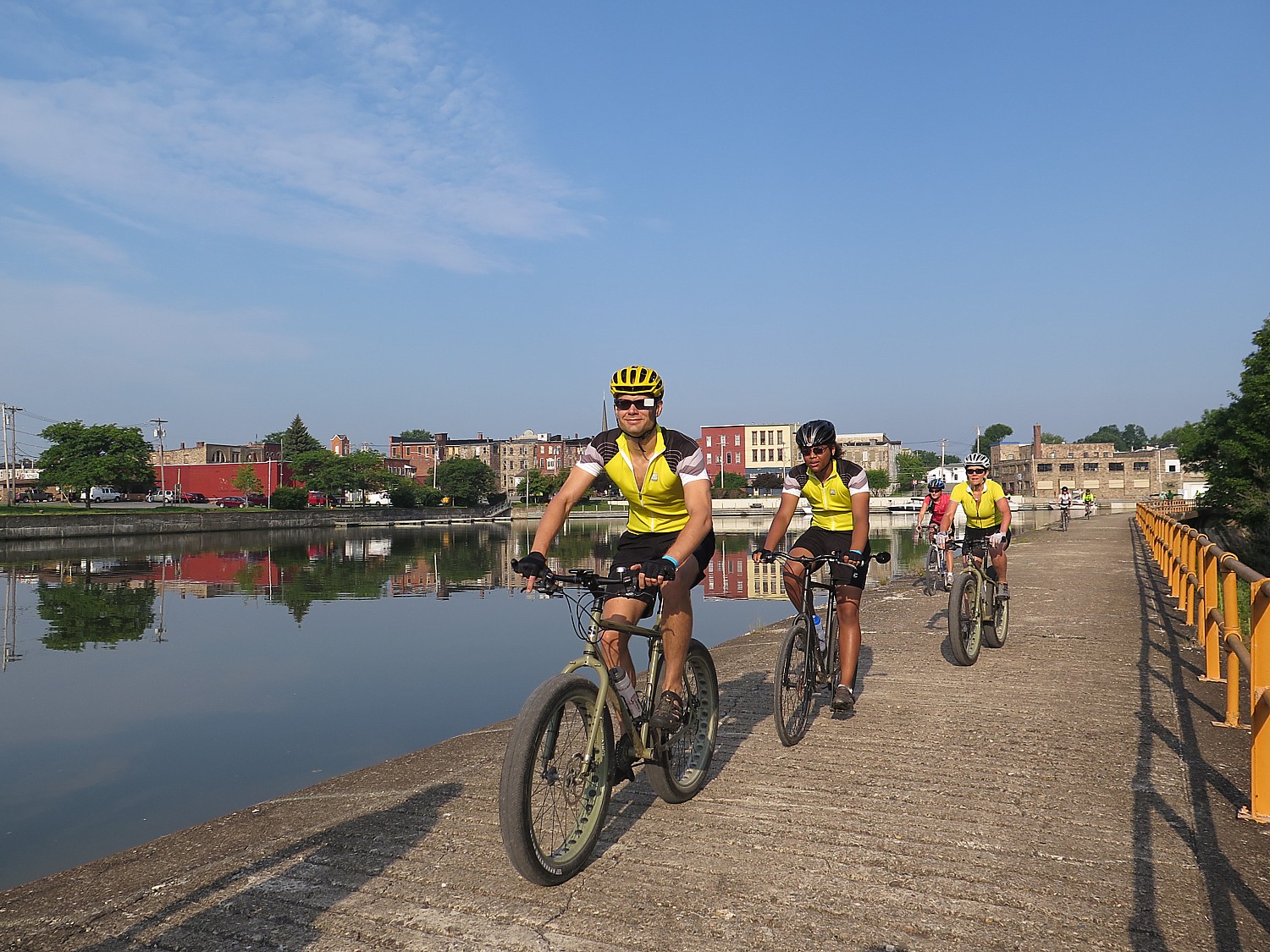 Cycle the Erie riders bike on the Medina section of the trail built over a rushing creek that drops into waterfalls, with an extraordinary angled turn that displays the engineering genius of the builders © 2016 Karen Rubin/news-photos-features.com

The 2016 tour kicks off in Buffalo on July 10 and arrives in Albany on July 17. This year, the Cycle the Erie Canal tour offers:

2-day and 4-day Options: If you can’t take off a full week, consider joining us for half the tour or for a weekend. With 4-day options from Buffalo to Syracuse and Syracuse to Albany, you’re halfway to becoming an Erie Canalway Trail End-to-Ender. These shorter options are great for children, too.

Return Shuttle: Riders from Buffalo, Pittsburgh, Toronto, and points west will be happy to hear we’ll once again be offering our return shuttle from Albany to Buffalo at the end of the ride. Less driving means more time to discover the Erie Canal, and there is so much to discover.

Last year’s ride had more than 600 riders and was frankly amazing, with all the sights to see and special activities arranged, not to mention to comradery and the adventure of camping out. The trip – superbly organized – really touches on all pistons.

See our series from the 17th Annual Cycle the Erie bike tour:

Cycle the Erie 400-Mile Bike Tour: Lockport, a Town Birthed by the Erie Canal and slideshow

400 miles and 400 years of history, Cycle the Erie tour crosses finish at Albany and slideshow