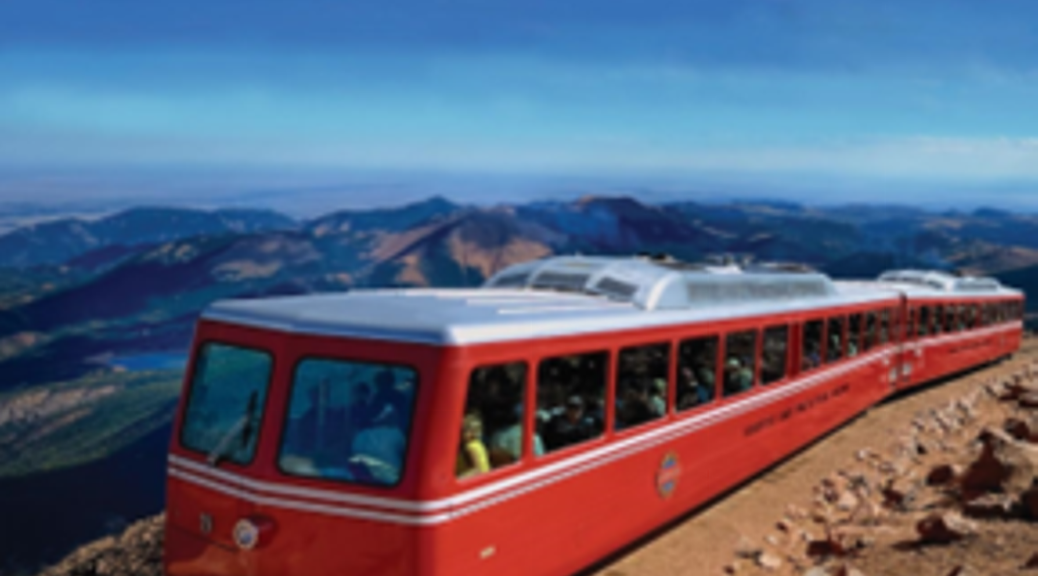 There is just something about historic railroads. Unfortunately, many of the engines and trains that have been saved are static. Lifeless. But there are places in America where you can see a steam engine come alive and run at speed (go fast), where you can climb America’s only accessible 14,000-foot mountain, ride on a 150-year old railroad lost in time and coming back to life in the beautiful valleys of central Pennsylvania and ride on the original subway cars from 1916 and 1930’s to places such Coney Island in Brooklyn. This is where open windows, strap hangers and swaying cars are as fun as the rides found at Coney Island. Yes, there are great train rides this summer, and here’s a ticket to four of the most interesting.

Climb every mountain. Well, there is only one 14-thousand-foot mountain in the US that you don’t have to climb. You can take the train. A unique train – a cog. At The Broadmoor Manitou & Pikes Peak Cog Railway, America’s highest railway reaches a height of 14,115 feet. This is where the words to the song “America the Beautiful” were composed. Completely rebuilt it’s back and better than ever climbing up America’s Mountain. This iconic railway is one of only two cog railways in the U.S.

Originally built in 1891 and owned and operated by The Broadmoor since 1925, this historic railway is the highest railroad in America, the highest cog railway in the world, one of Colorado’s top attractions, and one of the nation’s most unique experiences. A Ride & Stay package is also available via The Broadmoor, a luxury Forbes Five Star/AAA Five Diamond property, that includes accommodations and train tickets.

The Railway runs every day. For information and reservations hop onboard at www.cograilway.com

During most of the summer and into early fall, the Railway pulls the daily train once a month with a steam engine built in 1923 and that runs on waste vegetable oil.There is no extra charge for the steam engine pulled trains. It be believed Grand Canyon Railway is the last standard gauge passenger railroad in the US where steam engines are still scheduled to pull revenue trains.

You can save 30% on train tickets when you book in conjunction with any 1 or 2-night stay at The Grand Canyon Railway Hotel. Visit thetrain.com or call 1-800-THE.-TRAIN (1-800-843-8724) for updated and current information on both the hotel and the train.

It is now also possible to charter an entire luxury private railroad car or even an entire private train complete with chefs, bartenders, entertainers, and staff. These are ideal for “milestone” moments, such as graduations, family reunions, anniversaries, weddings, birthdays, etc. For charters call 928-635-5700 or visit www.thetrain.com/charters.

The East Broad Top Railroad (Orbisonia, Central Pennsylvania)
A 150-year-old narrow-gauge railroad coming out of hibernation and to life in a big way.

It’s one of the true treasures in American railroading. The East Broad Top Railroad (EBT) located in Orbisonia, PA and nestled in the rolling hills and farmlands in the central part of the state-started train rides and historic railroad shop tours this spring. The 150-year-old railroad is considered by the Smithsonian to be one of the best-preserved examples of 19th century American narrow gauge railroads (the rails less than 4 feet apart so the trains, and everything is smaller than “standard” railroads) and industrial complexes in the country.

It was already an antique when it was shut down in 1956; today is it a true treasure that far exceed the trains and tracks. The EBT still has six narrow-gauge steam locomotives, each awaiting their turn for restoration, one of which is expected soon. Initially, the railroad will offer one hour train rides in a vintage caboose, passenger car or even an open-air car on a nine-mile round-trip ride from the historic roundhouse and shops in Orbisonia to Colgate Grove and back. Prices begin at $20 for adults and $18 for children.

Reservations are strongly suggested. For information and reservations visit www.eastbroadtop.com or call 814-447-3285.

Yes, the New York subway is a railroad and a rather large one at that with 665 miles of mainline track and 472 stations that caters to more than a billion rides a year. It even has a museum in Brooklyn. Founded in 1976, the New York Transit Museum is dedicated to telling and preserving the stories of mass transportation – extraordinary engineering feats, workers who labored in the tunnels over 100 years ago, communities that were drastically transformed, and the ever-evolving technology, design, and ridership of a system that runs 24 hours a day, every day of the year.

Housed underground in an authentic 1936 subway station in Downtown Brooklyn, the Transit Museum’s working platform level spans a full city block, and is home to a rotating selection of twenty vintage subway and elevated cars dating back to 1907.

However, what most people don’t know is that this is not just a static museum. It maintains and operates a wide variety of vintage train cars dating back to 1907. These historic subway trains are occasionally run on what’s called “Nostalgia Rides.” Some go to Yankee Stadium, other to Coney Island or the Rockaway Beach & Boardwalk, and some venture to historic cemeteries or decommissioned subway stations. We’re talking open windows, flickering light bulbs, hanging on to strap hangers and swaying cars. It’s a trip, and a trip back in time on the real things, right down to the rattan seats and car card (ads) that try to sell everything from bras and cookies, the ZIP code and baseball games at the Polo Grounds, Ebbets Field and of course, Yankee Stadium. For information on the museum and Nostalgia Rides visit www.nytransitmuseum.org.