The latest Netflix series has renewed an interest in the royals and their connection to Africa. The ecotourism company, andBeyond (&Beyond), has created a safari to give guests a taste of the royal treatment.

Home of the classic safari, Kenya has an undeniable connection to Britain’s colonial era with its historical aura of elegance and grandeur. In fact, as documented in the recent television series, it was in Kenya that Queen Elizabeth first received the news of the death of her father, King George, and of her ascension to the throne. Inspired by this and the many other connections between the royal family and this former colonial stronghold, andBeyond has created a modern safari fit for a queen. This grand itinerary visits places made famous by explorers and royals of old, including special touches like vintage vehicles, which will take the intrepid traveler on a journey far back in time.

Highlights of the nine-night itinerary

Add on to Uganda

Guests can add to this Kenyan adventure by hopping across the border to Uganda, putting them within reach of the once-in-a-lifetime experience of tracking Gorillas and taking them to the end of the ‘Lunatic Line’ in Kampala.

Complement the Northern section by spending a few nights on Lake Victoria – andBeyond’s travel experts can tailor-make the itinerary.

The itinerary is ideal for history buffs, romance, wildlife enthusiasts and avid photographers.

andBeyond is one of the world’s leading luxury experiential travel companies, designing personalized high-end tours in 15 countries in Africa, five in Asia, and four in South America. The company also owns and operates 31 safari lodges and camps, as well as set-departure expeditions, throughout Africa, which positively impact more than 9 million acres of wildlife land. Established in 1991, andBeyond takes exceptional care of its guests in order to make a difference; its commitment to sustainable responsible travel, conservation and community empowerment has been globally recognized with multiple awards over the years. The company offers warm local hospitality and sublime natural luxury that combine with interpretive natural experiences led by highly-skilled guides and rangers. 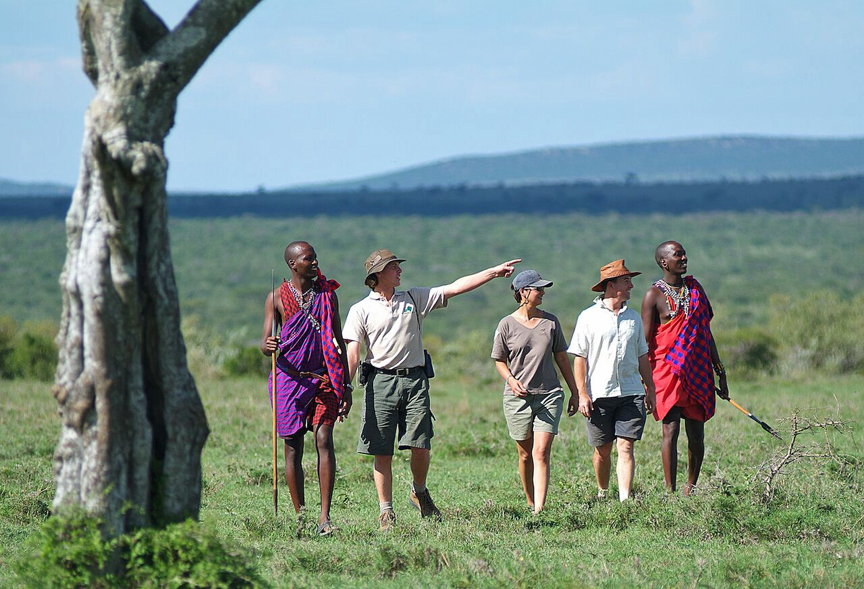 You can win a 7-day/6-night safari, offered by Natural Habitat Adventures, to the famed Maasai Mara National Reserve in Kenya World in a sweepstakes from the World Wildlife Fund aims to raise public awareness of conservation efforts.

The week-long safari offers an immersion in East Africa’s iconic landscapes, amid some of the most prolific and diverse wildlife on the continent. The prize-winner and a guest will explore the vast savannas of the Maasai Mara in search of the fabled Big Five — elephant, rhino, buffalo, lion and leopard — and a host of other wildlife. Safari activities include classic game drives and exclusive guided bush walks on a private conservancy, with exceptional proximity to wildlife from a mobile safari camp located in a remote sector of the reserve.

The sweepstakes aims to raise public awareness of the efforts of WWF and its on-the-ground partners in Kenya who have worked together for years to protect elephants, rhinos and other wildlife by fighting illegal wildlife trade, minimizing human-wildlife conflict, and protecting critical habitat.

World Wildlife Fund (WWF) is one of the world’s leading conservation organizations, working in 100 countries for over half a century. With the support of almost 5 million members worldwide, WWF is dedicated to delivering science-based solutions to preserve the diversity and abundance of life on Earth, halt the degradation of the environment and combat climate change. Visitwww.worldwildlife.org to learn more and follow our news conversations on Twitter @WWFnews.

Natural Habitat Adventures is a world leader in responsible adventure travel and nature-based ecotourism. Since its founding in 1985, the company has offered eco-conscious expeditions and wildlife-focused small-group tours to the planet’s most remarkable nature destinations. Inspired and created from years of scouring the planet for the singular and extraordinary, Nat Hab’s itineraries are artfully crafted experiences that are far from “typical.” Trips are guided by professional naturalist Expedition Leaders, and Nat Hab enjoys a longstanding reputation for hiring some of the world’s best guides. Conservation is at the forefront of everything NHA does, and its philosophy is simple: tourism must work with and benefit local communities, which will in turn find value in protecting natural resources and wildlife. NHA is proud to be the travel partner of World Wildlife Fund, sharing a mutual commitment to travel as a means of helping to protect the world’s wondrous natural places.  Nat Hab has donated more than $2 million to WWF and will continue to donate 1% of gross sales plus $100,000 annual through 2018 in support of WWF’s mission