FORT LAUDERDALE, FLA.– Imagine this! Couples can exchange vows at ‘the end of the world’ on a once-in-a-lifetime Antarctica expedition with Atlas Ocean Voyages’ new Happy Ever Atlas destination weddings and vow renewals.

Departing on Valentine’s Day, February 14, 2022, World Navigator’s Happy Ever Atlas voyage will offer couples and their companions the most adventurous destination wedding on earth. The Happy Ever Atlas destination wedding package is complimentary for guests when registered in advance. Plus, the bride enjoys a 50 percent savings off her stateroom when the wedding party books five or more rooms.

The package includes a legal marriage license, valued at more than $650, and many additional inclusions, which ensure a unique, complete and unforgettable nuptial exchange. As with all Atlas luxe-adventure expeditions, all guests travel in the brand’s signature All Inclusive All The Way style, which, on Antarctica expeditions, includes complimentary round-trip air travel aboard Atlas’ private charter jet service direct to Ushuaia, Argentina. For more information about Atlas Ocean Voyages’ Happy Ever Atlas wedding package, please visit www.AtlasOceanVoyages.com/AntarcticaWedding.

“Antarctica is the most coveted bucket-list destination and Atlas Ocean Voyages is delivering the Seventh Continent in the most distinctive and memorable way,” said Alberto Aliberti, President of Atlas Ocean Voyages. “World Navigator’s Happy Ever Atlas voyage will offer couples the most unique setting to exchange their vows for a wedding day they will never forget. Throughout the voyage, guests will also discover fascinating wildlife; awe at Antarctica’s pristine and majestic landscape; and learn about the need to sustain and preserve our planet’s fragile ecosystem.”

Atlas will provide an officiant to conduct the ceremony; a wedding coordinator to ensure everything is perfect for the big day; and a professional wedding photographer to capture each breathtaking moment. Depending on weather, ceremonies can be performed both on land, with penguins, seals and other Antarctica wildlife to bear witness, or in shipboard venues, including World Navigator’s bridge.

Additionally, Atlas will establish an online wedding registry, which allows family and friends to contribute to the couple’s voyage costs or other gifts. Family and friends can gift upgraded transfers, excursions, spa services and more.

Atlas’ signature All Inclusive All the Way provides all guests a complete and seamless experience by including complimentary round-trip air travel, choice of a shore excursion at every port, prepaid gratuities, polar parkas, emergency medical evacuation insurance, premium wine and spirits, international beers and coffees, Wi-Fi, L’OCCITANE bath amenities, and regionally inspired gourmet dining. In every stateroom, guests enjoy binoculars to use on board, en suite coffee, tea and personalized bar service, and butler service in suites.

For its Antarctica voyages, Atlas is the first and only cruise brand to charter its own widebody private jet to bring guests in a safe bubble directly to Ushuaia, where Antarctica expeditions embark. Guests travel from 16 major U.S. and Canada gateways and connect with Atlas’ branded jet at Orlando airport. Atlas’ private charter jet eliminates lengthy layovers in an international airport, common with very limited commercial options.

Atlas’ Plan With Confidence flexible travel policy provides travelers a 100 percent refund of deposited funds up to 91 days prior to sailing. Plus, they can change their reservation as many times as they want, up to 15 days before their voyages’ sail date. They can even change their destination and sail with Atlas in another part of the world or choose to cancel at least 15 days or more prior to the departure date and be assured of a 100 percent future cruise credit.

Atlas Ocean Voyages is a luxe-adventure expedition cruise brand designed for experienced and fun-seeking travelers to immerse in exciting and awe-inspiring moments in less-visited, bucket-list destinations. At 9,930 GRTs, World Navigator fosters a refined and convivial ambience for up to 196 guests and features the most-modern hygiene and cleanliness measures incorporated into her state-of-the-art design.

World Navigator is Polar Category C- and Ice Class 1B-certified and her construction is on schedule for delivery in July 2021. World Navigator will be joined by World Traveller and World Seeker in 2022 and World Adventurer and World Discoverer in 2023. 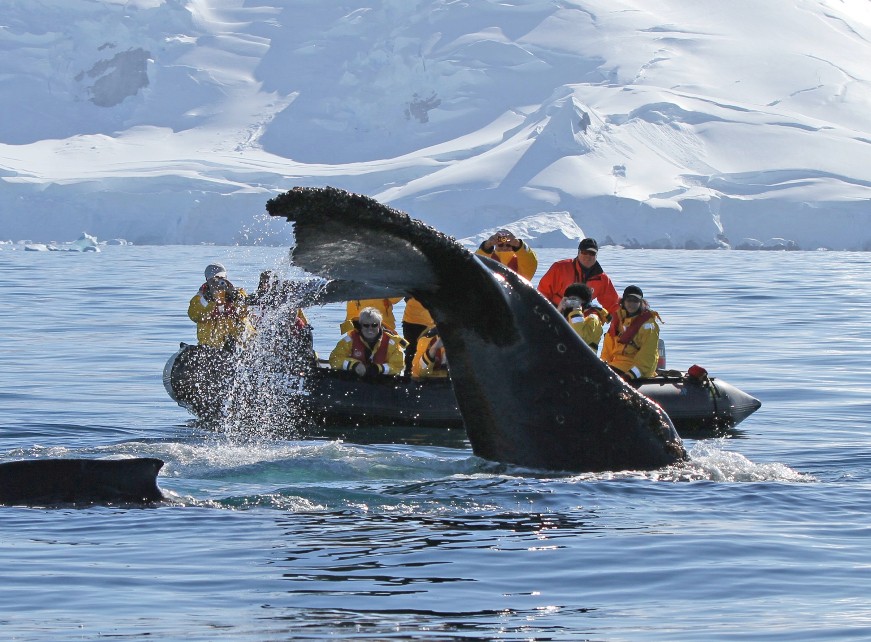 Marjorie Adams plans to join ExploringCircle’s cruise to Antarctica so she can follow in the footsteps of her grandfather, Walter Kerr Queen, who served as Chief Engineer on one of Admiral Byrd’s two ships that explored the frozen continent.

SEATTLE, WA – The lure of the Poles is legendary. Especially the South Pole. Consider Sir Ernest Henry Shackleton’s third expedition between 1914 and 1916 that left his ship, Endurance, crushed by ice and his men reduced to tossing about in lifeboats on a stormy sea. Consider Rear Admiral Richard Byrd, Jr., who visited the Arctic and Antarctica. Most recently Henry Worsley, a well-connected Brit on a solo land crossing of Antarctica died in this pursuit in January.

But in stark contrast to the arduous challenges and dangers of those early explorations, today’s expedition ships that probe the allure of Antarctica are appointed for cruise travelers and offer organized on-and off-ship activities.  And on one Antarctica cruise in 2016, a granddaughter of the Chief Engineer of the SS Jacob Ruppert, one of Byrd’s two ships from the 1933-1934 expedition, will visit the frozen continent. She will be traveling with Seattle-based environmental crusader ExploringCircle, a new company that combines a long adventure travel legacy with a strong sense of purpose.

“I feel that by doing this it can give my grandfather, Walter Kerr Queen, a voice,” says Marjorie Adams. “He was in the company of much better-known names. But he is the person who made sure this steamship’s engine didn’t break down.” 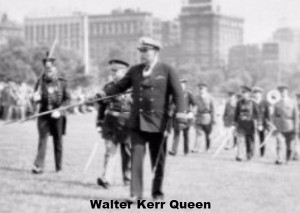 Queen had made his mark and money by designing improved expansion joints for industrial steam systems, a venture begun in his garage in Needham, MA. Eventually his work was known to Byrd who personally called upon Queen to accompany his second expedition to Antarctica. Queen, who was a Lieutenant Commander in the US Naval Reserve in World War I, was assigned to SS Jacob Ruppert, a steel vessel. The other, USS Bear, a wooden vessel, would over-winter. The premise was that if disaster struck, the wooden ship might not sink but most certainly the steel vessel would. Now available in paperback through Amazon is Discovery: The story of the Second Byrd Antarctic Expedition (Admiral Byrd Classics).

“The family story is that my grandfather wanted to travel as far north as he did south, after returning in 1934,” adds Adams. In 1937 her grandfather traveled on a Hudson Bay Company supply ship, SS Nascopie, into the eastern Arctic. She took a similar trip in 2009, traveling with a niece north to Elsmere Island.

“My niece and I were chatting about where we might like to go on vacation. My niece turned Grandpa’s words around: ‘I’d like to go as far south as I’ve been north.’”

So Adams and her niece are booked on Antarctica Peninsula: Last Discovered Continent, a 12-day adventure that begins and ends in Ushuaia, Argentina after coming and going through Drake Passage to reach the South Shetland Islands and Antarctic Peninsula and the Antarctic Continent.

Guests tour the region through the icebergs by Zodiak and kayak and have the option also to camp. They are on M/V Sea Spirit, a classic luxury expedition ship that boasts spacious suites, two restaurants, an open-bridge policy and an elevator. The Sea Spirit’s stabilizer fins will help to make the crossing comfortable. This journey is available from November through February at a per person double rate starting at $5,995. For more information on this trip please see http://www.exploringcircle.com/antarctica-peninsula-1

With decades of experience leading Antarctica travel and helping adventurers realize their polar dreams, ExploringCircle specializes in helping clients arrange the Antarctica cruise that is the right fit for each client. Details on other cruises of this region are available at http://www.exploringcircle.com/antarctica-travel. Some of these cruises offer savings of up to $4,000 on select cabin bookings on specified itineraries.

Before they travel, Adams and her niece, as with all of ExploringCircle guests, will be invited to examine ExploringCircle’s six related environmental causes, choosing one to which to pledge their support. This conversation is vital to the company’s mission. By talking about, for example, plastic detritus in oceans, young and old alike while on a cruise can wrap their minds around threats to ocean waters and to marine and wildlife. ExploringCircle in turn Pays-it-Forward by donating up to five percent of client fee to the environmental cause chosen.

“We listen to our guests and use decades of experience to help them realize their travel dreams. In doing so, we fund hope,” says Kristy Royce, founder.  “Leave No Trace Behind is no longer enough.”

Founded in August 2015 but with a legacy that spans over two decades, ExploringCircle (http://www.exploringcircle.com/) is a new company with a diverse adventure travel history and a strong sense of purpose. ExploringCircle sends travelers on journeys of discovery and adventure and then donates up to 5 percent of the trip’s cost to organizations working to make Earth a better place. ExploringCircle combines the joy of travel with a social consciousness built upon three primary principles: To send people on amazing trips / To engage people around important environmental and social issues / To direct funds to groups actively working on those causes.