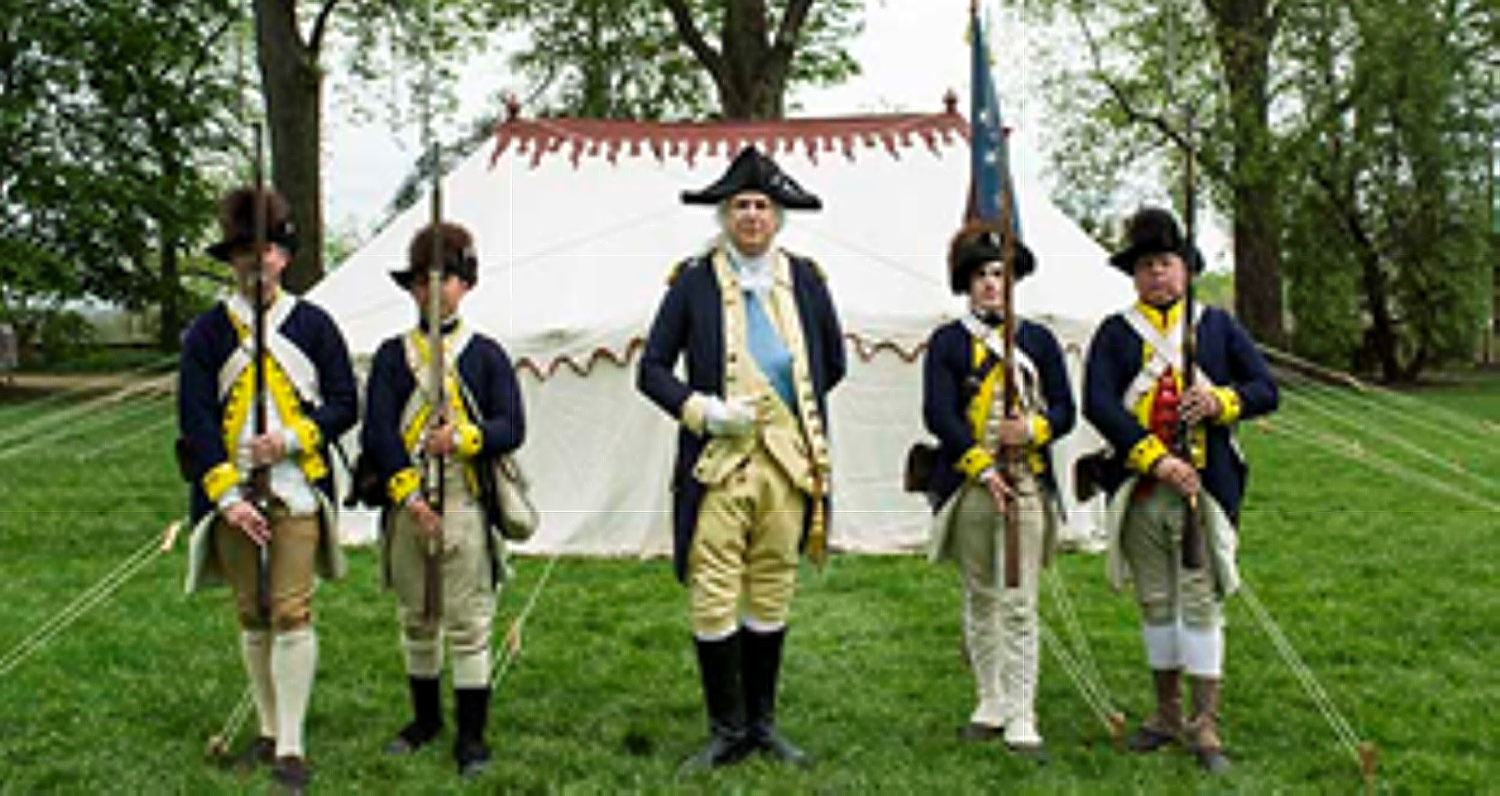 New York, NY – The New-York Historical Society, the oldest museum in New York, celebrates Revolutionary Summer. The festivities kick off on July 4, with Free Admission for kids 17 and under. A Museum-wide exploration of Revolutionary War times, Revolutionary Summer presents outdoor events every weekend featuring characters from the era; 18th-century art and artifacts; a diorama of the Continental Army; and a host of programs for all ages, including trivia nights, a DJ evening, and a Revolutionary Drag Tea Party. On select weekends, visitors can explore a replica of George Washington’s Headquarters Tent at an outdoor Continental Army encampment, meet Living Historians portraying soldiers and spies, and learn about the many facets of camp life during the War for Independence.

“We’re so excited to welcome visitors to New-York Historical this summer with a full line-up of fun ways to experience the Revolutionary era,” said Dr. Louise Mirrer, president and CEO of the New-York Historical Society. “Revolutionary Summer celebrates the outstanding, revolutionary times that ignited the birth of our country with everything from a scavenger hunt to the chance to meet George Washington.”

George Washington’s Headquarters Tent
July 4–7 | July 26–28 | August 16–18 | August 23–25 | September 13–15
The centerpiece of Revolutionary Summer is a replica of George Washington’s Headquarters Tent, on display in New-York Historical’s outdoor courtyard on select weekends. The original Tent is on display at the Museum of the American Revolution (MoAR) in Philadelphia. Often called the “first Oval Office,” the Headquarters Tent was where Washington and his most trusted staff plotted the strategy that ultimately won the Revolutionary War. On loan from MoAR, this painstakingly detailed, hand-sewn replica—made of custom woven linen and wool fabrics—was created as part of a collaboration between MoAR and Colonial Williamsburg. The Tent is staffed by MoAR educators, who lead visitors on an immersive tour through history.

On View
A host of special installations and artifacts are on view at New-York Historical as part of Revolutionary Summer. One of the highlights is a recently discovered watercolor painting of the 1782 Continental Army encampment at Verplanck’s Point, New York—the only known eyewitness image of Washington’s Headquarters Tent during the Revolutionary War—on loan from MoAR. Other highlights include a camp cot used by Washington at Valley Forge during the winter of 1777; John Trumbull’s iconic painting of Washington that he gave to Martha Washington in 1790; and a pipe tomahawk gifted by Washington to Seneca Chief Sagoyewatha. Also on display is a diorama depicting the Verplanck’s Point encampment and the Hudson River shoreline, providing visitors with a 360-degree view of the scope and scale of Washington’s forces.

Revolutionary Summer also showcases historic documents from the Gilder Lehrman Institute of American History, including an original 1823 William J. Stone facsimile of the Declaration of Independence; a broadside from King George III announcing the armistice and officially ending the war; and a letter by Martha Washington detailing domestic life in the aftermath of the Revolution.

Independence Day Celebration: Celebrate the Fourth of July exploring George Washington’s encampment! Enter his Headquarters Tent, meet the man himself, and experience where the future first president strategized, dined, and slept while MoAR staff describe his daily life. Also on tap: singalongs with the Hudson River Ramblers; fife and drum corps music; a one-woman play about Deborah Sampson, the woman who disguised her gender to enlist in the Continental Army; family-friendly food for purchase; and Living Historians portraying soldiers from the Continental Army, as well as John Adams, who’ll read the Declaration of Independence. Free Admission for kids age 17 and under.

Living History Weekends: Outdoor Continental Army Encampment: Every weekend, visitors of all ages can explore a recreation of the Continental Army’s encampment in New-York Historical’s courtyard, located on 76th Street, around the corner from Central Park West. Free with Museum Admission.

Join the Continental Army | July 13 & 14 | August 31 & September 1 | September 7 & 8
The Continental Army wants you! Explore their encampment tents and displays of 18th-century weaponry, participate in drills, and interact with all of the tools and equipment of a common soldier.

Everyday Life in Camp | July 20 & 21
Join the 3rd New Jersey Regiment to experience how soldiers and their families spent time in camp when they weren’t marching to war. Meet the women who helped prepare for military campaigns, play with 18th-century toys and games, and witness how soldiers passed the time.

Field Music on the March | July 27 & 28
March along to Revolutionary War field music performed by the drum and fife musicians of Hearts of Oak and the New Jersey Field Music Group.

Fighting on Horseback | August 10 & 11
Saddle up! Get an up close look at the special equipment, weapons, and techniques used by cavalry in the Continental Army and meet the 2nd Continental Light Dragoons and the 4th Legion.

This millennial-focused series of fun events and programs explores fascinating Revolutionary topics while drinking and mingling!

Revolutionary Trivia Night! |Friday, July 12, 8 pm | Friday, August 23, 8 pm | $20 ($18 Members)
Do you know what George Washington’s favorite breakfast beverage was? If you do (or even if you don’t), bring your friends for a fun night of trivia courtesy of the fact fanatics at Trivia, AD! Ages 21 and up. Wine included with ticket.

Nerdy Thursdays: Revolution Night | Thursday, August 8, 6:30 pm | Free with RSVP
Swing by the Museum for this signature event from the Black Gotham Experience that brings together a DJ, gallery talks, cocktails, and a brilliant group of nerdy people. RSVP at blackgotham.com

For additional information about Revolutionary Summer and its related programs, visit nyhistory.org/revsummer.

Lead support for Revolutionary Summer provided by the Achelis and Bodman Foundation. Additional support provided by Richard Brown and Mary Jo Otsea. Support for the MoAR’s participation in Revolutionary Summer is generously provided by William and Candace Raveis. Exhibitions at New-York Historical are made possible by Dr. Agnes Hsu-Tang and Oscar Tang, the Saunders Trust for American History, the Seymour Neuman Endowed Fund, the New York City Department of Cultural Affairs in partnership with the City Council, and the New York State Council on the Arts, with the support of Governor Andrew Cuomo and the New York State Legislature. WNET is the media sponsor.The New-York Historical Society, one of America’s preeminent culturalinstitutions, is dedicated to fostering research and presenting history and art exhibitions and public programs that reveal the dynamism of history and its influence on the world of today. Founded in 1804, New-York Historical has a mission to explore the richly layered history of New York City and State and the country, and to serve as a national forum for the discussion of issues surrounding the making and meaning of history.

The Museum of the American Revolution explores the dramatic, surprising story of the American Revolution through its unmatched collection of Revolutionary-era weapons, personal items, documents, and works of art. Immersive galleries, powerful theater experiences, and interactive digital elements bring to life the diverse array of people that created a new nation against incredible odds. Visitors gain a deeper appreciation for how this nation came to be and feel inspired to consider their role in the ongoing promise of the American Revolution. Located just steps away from Independence Hall, the Museum serves as a portal to the region’s many Revolutionary sites, sparking interest, providing context, and encouraging exploration. The Museum is a private, non-profit, and non-partisan organization. For more information, visit www.AmRevMuseum.org or call 877.740.1776.