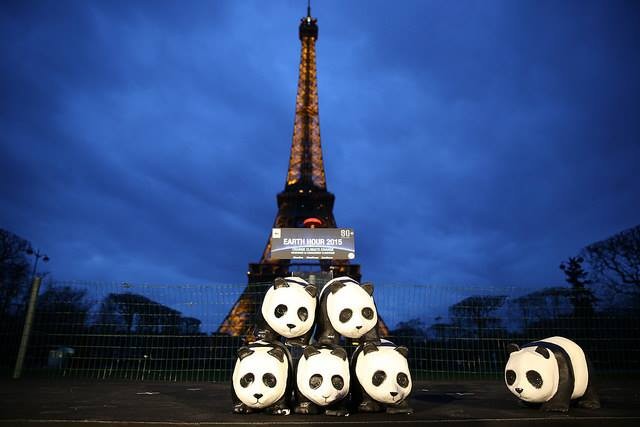 Much as people from far and wide are drawn to gaze in utter primeval fascination at a total eclipse, and the biennial Manhattanhenge, when the setting sun aligns with  the city’s east-west streetscape, inspires contemplation of the man-nature synergy, Earth Hour is a sight to behold: when cities and towns customarily blazing in light go dark for an hour, one by one around the globe. It is also a demonstration of people power, rising up to support climate action against the forces that would darken the planet. This year’s event, March 19 on March 19, from 8:30-9:30 pm local time, is the tenth time that millions of people around the globe will take action and switch off the lights.

As the world steps into a new era of climate action, WWF’s Earth Hour is urging supporters to shine a light on climate action through the most powerful communication tool of our time – social media.

This Earth Hour, Saturday, 19 March 2016 8:30 p.m. local time, as the world’s most iconic landmarks prepare to switch off their lights, supporters will be invited to take a stand for climate action on their own personal landmarks – their Facebook and Twitter accounts.

Social media users can promote their commitment to the planet by donating their Facebook feeds to spread climate awareness and action in a few clicks on www.earthhour.org/climateaction. Users can also add a custom-made Earth Hour filter to their profile pictures on Facebook and Twitter to show they believe this is our time to change climate change.

“Social media knows no physical boundaries and neither does climate change,” said Siddarth Das, Executive Director, Earth Hour Global. “A simple action on social media is the kind of powerful statement that can excite friends and communities to be a part of the climate action we need to take on this global challenge.”

With the innovative ‘Donate Your Social Power’ Facebook app, created by Earth Hour in collaboration with creative agency iris Worldwide, supporters around the world can share climate information that matters most to them.

By donating their timelines, users can invite friends and followers to discover how people and communities are helping protect #PlacesWeLove in Australia such as the World Heritage Forests in Tasmania and the Great Barrier Reef or how they can be a part of India’s ambition to #GoSolar. They can also collectively shine a light on the most pressing climate issues facing countries, people and wildlife in Latin America and be a part of Africa’s efforts to change climate change by helping protect forests and promoting access to climate education and renewable energy.

“Climate action today will decide the future of our planet for generations to come. As more people sign up, an increasing number of individuals will be able to see how climate action starts with each of us, here and now,” said Das. “Earth Hour empowers each individual — through a social event, interactive campaigns or through social networks — to be a part of making climate change history.”

This year marks Earth Hour’s tenth lights out event. In the past nine years, WWF and Earth Hour teams worldwide have harnessed the power of the movement to raise support and funds for access to renewable energy, protection of wildlife and their habitats, building sustainable livelihoods and driving climate-friendly legislation and policy.

In 2016, Earth Hour will continue to power grassroots efforts to change climate change including driving a petition for 100 per cent renewable energy in Spain, protecting forests and biodiversity in Africa and helping devise a comprehensive solution to Southeast Asia’s persistent haze crisis by working with governments, businesses and civil society simultaneously on peatland protection and sustainable palm oil.

“Less than three months ago, leaders from 196 nations signed a historic agreement in Paris to take collective action on climate change, clearly showing that we are at a turning point in our fight to cut carbon pollution,” Sara Thomas, Manager, Online Advocacy, World Wildlife Fund, writes.

“I’ll be turning out my lights and hope you’ll join me. Sign up for Mobile Action Team updates and get a text message reminder from me to turn off your lights on Earth Hour day.

“You’ll join our list of engaged mobile activists and opt in to receive text messages on the latest opportunities to help World Wildlife Fund protect wildlife and conserve nature.”

Earth Hour 2016 will be celebrated on Saturday, 19 March 2016 between 8:30 and 9:30 p.m. in your local time zone. Log on to www.earthhour.org for more stories and articles on teams using the Earth Hour movement to shine a light on climate action.

“This is our time to change climate change.”

Link to photos on Earth Hour activities around the world: http://www.earthhour.org/photo-galleries 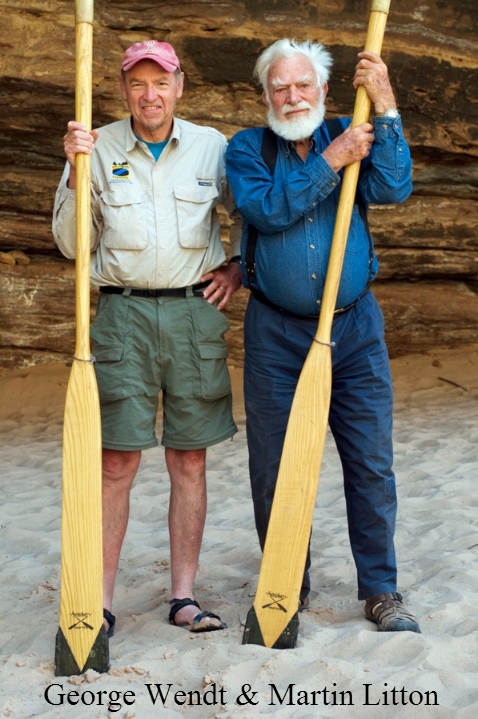 George Wendt and Martin Litton are trying to stop two development projects which they say threaten aquifers that feed the Colorado River in its course through the Grand Canyon.

George Wendt, founder and owner of river rafting company, O.A.R.S. has thrown down the gauntlet against developers who, he says, would threaten aquifers that feed the Colorado River in its course through the Grand Canyon.

At issue is the proposed Tusayan development that would add 2,200 homes and collateral services and amenities less than two miles from the South Rim entrance to Grand Canyon National Park.

And in another section of the Canyon, Wendt hopes that sufficient forces can be brought to bear against the creation of a gondola designed to transport upwards of 4,000 tourists daily from the rim to the river. This is known as the Grand Canyon Escalade project.

The National Park Service has already expressed serious concerns about the environmental impact these projects could have on the Grand Canyon.

“These two very real development projects are threatening to impact the canyon in a big way. Anyone who has intimately experienced the canyon’s amazing tranquility, or hopes to someday, should be very concerned,” Wendt warns. “We have definite feelings that both would be harmful to the long-term integrity of the Grand Canyon.”

The Tusayan development planned for the area just south of the main South Rim entrance to Grand Canyon National Park would have many impacts, he believes. Companies who do business in this region and most visitors have expressed that the area is already almost full to capacity much of the year and that crowding in more people would negatively impact the experience of those who are presently coming to the canyon.

“More significantly, however, we share the feeling of the National Park System that there is not enough water in the Tusayan area to support further development without tapping into deep wells that almost certainly would divert water from the limited number of natural springs that feed the eco system of the Colorado River and its surrounding side canyons. For this reason, we are opposed to the major development presently contemplated for the Tusayan area,” Wendt continues.

The Escalade project would bring people down into the Canyon to river level at the confluence of the Colorado River and the Little Colorado River, he explains. “The construction of the gondola close to river level would be very impactful from a visual and wilderness perspective. Although the operators probably would try to prevent people from leaving the gondola terminus to go hiking, we worry that almost invariably the new access would lead to multiple additional impacts from hikers who found it irresistible to try to use this easy access point for extended hiking excursions into the fragile area. Native American groups consider the Little Colorado Confluence area sacred and they likely will also have strong concerns about the potential impact from a gondola into the Grand Canyon.”

“Buried within the Tusayan and tramway proposals is the belief that a tiny circle of entrepreneurs has the right to profit at the expense of everyone else by destroying a piece of the commonwealth — a landscape that is the birthright and the responsibility of every American,” wrote Kevin Fedarko in an Aug. 9, 2014, op-ed piece for the New York Times. (Fedarko is the author of The Emerald Mile, a riveting story about a legendary river run through the Grand Canyon.)

A contributor to O.A.R.S.’ legacy of wilderness preservation is Martin Litton whose Grand Canyon Dories company Wendt acquired in 1988. Litton at age 97 is a legendary environmental crusader who is largely credited for his success in defending the Grand Canyon from two proposed dams in the 1960’s.

Championing the rights of rivers is nothing new to Wendt, founder and owner of what may be the world’s best-known river rafting company, O.A.R.S. Over its 45-year history, O.A.R.S., one of the world’s best known river companies, has contributed more than $3 million toward the preservation of the environment and to conservation initiatives worldwide.

Wendt, an activist like Litton, has also joined various battles throughout the years to protect natural places that were threatened by dam building projects, including the fight to save the Grand Canyon, the Stanislaus and the Tuolumne Rivers in California and the Bio Bio River in Chile.

O.A.R.S. has been providing whitewater rafting vacations to some 500,000 guests since 1969. Over the decades the company has set the standard in first-class rafting, sea kayaking and multi-sport adventure, with destinations and unparalleled experiences on over 35 rivers and coastlines around the world. O.A.R.S. caters to active travelers of all ages and abilities with more than 75 unique itineraries, including one-day and weekend escapes. In 2013, for the seventh consecutive year, Condé Nast Traveler recognized Mindy Gleason, O.A.R.S. Reservation Manager and International Adventure Travel Consultant, as Condé Nast Traveler’s standalone Top Travel Specialist in the River Rafting category. In 2013 Outside Magazine, America’s leading multimedia active-lifestyle brand, named O.A.R.S. one of the top two outfitters in the world in its annual Active Travel Awards recognition program.