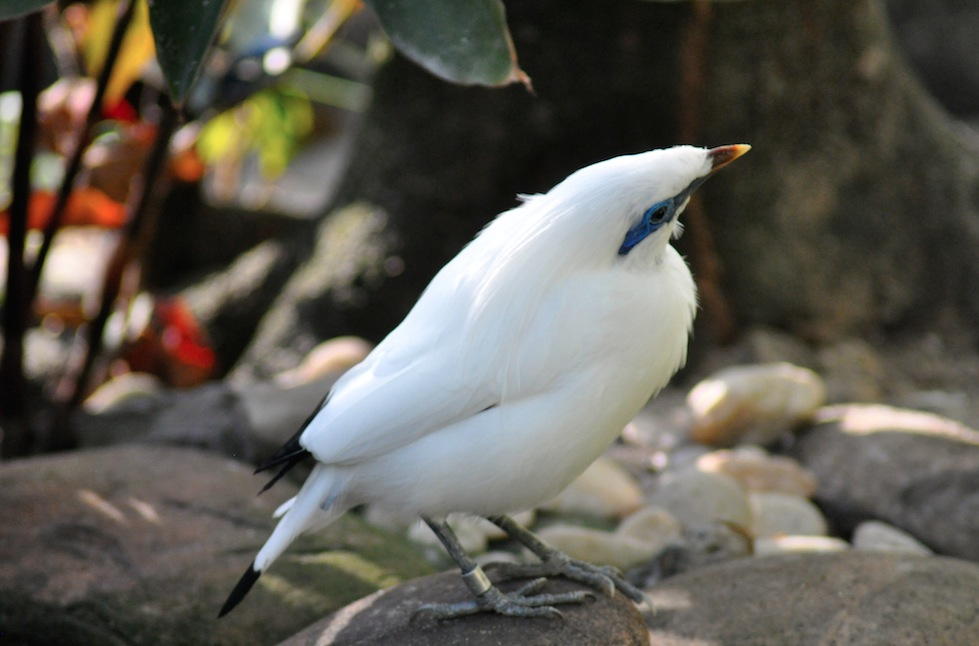 The Palm Beach Zoo, West Palm Beach, Florida, is hailing a rare victory in the battle against global climate change: thanks to America’s accredited zoos and aquariums, more than 30 endangered species have been brought back from the brink of extinction. With climate change, population growth and deforestation, and poaching threatening species around the world, we are facing what scientists call the “Sixth Extinction.”

But the 229 accredited members of the Association of Zoos and Aquariums (AZA) have built a unique infrastructure to save endangered species – breeding programs that coordinate across many institutions to ensure genetic diversity, systems so that animals can be safely moved between institutions, and partnerships with local, national, and international conservation organizations working on re-introducing these animals to their native ranges.

Because of that infrastructure, there is good news in the face of the extinction crisis:  from the Florida manatee to the California condor, the Hawaiian crow to the Puerto Rican crested toad, the Chinese alligator to the American bison, zoos and aquariums have saved more than 30 species, and are working today on dozens more.

At the Palm Beach Zoo & Conservation Society, staff members are working on conservation programs for fifty endangered species, including for the Bali mynah bird as part of the of AZA’s Species Survival Plan(R) (SSP). Bali mynah are one of the rarest birds in the world, and two males, named R2 and D2, can be seen on exhibit in the Zoo’s Beuttenmuller Asian Aviary. As a part of the SSP, D2 will be moving to the Denver Zoo soon to form a new breeding pair. The Palm Beach Zoo has recently received another male from Tampa’s Lowry Park Zoo to join R2 once the new bird completes his quarantine.

“Every zoo in the SSP serves a vital purpose in sustaining the population of this critically endangered Bali mynah,” said Jan Steele, general curator for the Zoo. “And for us at the Palm Beach Zoo & Conservation Society, it’s to provide a rocking bachelor pad for young males until they’re old enough to settle down and raise a family.”

Over the next several months, AZA-accredited zoos and aquariums will celebrate these successes, and invite the public to support efforts to save even more species. In November, in honor of Thanksgiving, AZA is spotlighting endangered birds, including:

Bali mynah have striking white plumage with black wing tips and bright blue coloration around the eyes. The species can approach 10 inches in height. Bali mynahs are nearly extinct in the wild because poachers collect them for the illegal pet trade, where they are valued for their striking plumage and beautiful songs. Because of this poaching, Bali mynahs are found almost exclusively in zoos.  But much has been done to help the Bali mynah’s wild population recover, including protection of their native breeding grounds. In 1987, 40 Bali mynahs from US zoos were sent to the Surbaja Zoo in Indonesia to form a breeding group, with resulting offspring released into the wild. In 2009, Bali mynahs raised in managed care were introduced to a neighboring island, Nusa Penida, and seem to be doing well so far.

The largest bird in North America, the California condor once dominated the western skies, able to soar to 15,000 feet and travel up to 150 miles a day in pursuit of food.  With its keen vision, the condor hunts for carcasses of dead animals, and then swoops in to feast, serving as nature’s clean-up crew.  But destruction of habitat and poaching decimated the species, and by 1982, only 22 birds remained in the wild.  The San Diego Zoo Global, the Los Angeles Zoo and 16 other AZA institutions took the lead at captive propagation, working with a network of government and non-profit partners.  Beginning in the early 1990s, zoo-bred condors began being reintroduced into the wild.  From a low of 22, there are now more than 435 condors in the world, with almost 250 free-flying in the West.

Prior to the 1960s, there were probably around 10,000 Guam rails living on Guam, a South Pacific island. Sometime between 1944 and 1952, brown tree snakes arrived on Guam, most likely on cargo ships. The snakes’ population rapidly increased, because there was plentiful prey (such as the Guam rails) and no natural predators. The tree snakes wiped out the native animal populations, and by the 1970s, 9 of the 11 native bird species, including the Guam rail, had disappeared.  Trying to save the species, the last few birds were removed from the island in the 1980s. In 1989, reintroduction of these birds began on the island of Rota, near Guam, as part of the Association of Zoos and Aquarium’s Species Survival Plan(R) (SSP) for the species.

The palila Hawaiian songbird is one of the endangered Hawaiian honeycreeper species and efforts to expand the palila population back to its historic range at Pu`u Mali have included experimental releases of captive-bred birds, as well as relocation of wild birds to protected areas. The palila was the first animal to have a federal circuit court case named after it, in a precedent setting case that increased protection for endangered species.  While several zoos are working to preserve the palila, they are not currently on exhibit to the public.

Known in Hawaii as Alala, the Hawaiian crow is the most endangered corvid in the world and is the only crow species found in Hawaii. The birds are extinct in the wild, and the remaining population is managed at zoos, where the chicks are fed and cared for by animal care staff they never see to ensure they do not imprint on humans.  The last `alal? were recorded in their natural habitat in 2002. Planning is underway to restore the `alal? to the Big Island of Hawaii beginning this year.

The Waldrapp ibis, also known as the hermit ibis or the northern bald ibis, may not be viewed by some as the most attractive bird, but their strong character and bizarre appearance give them unique appeal. They look almost comical with their bald heads, long red beaks and crazy crest feathers going every which way. Their black feathers take on brilliant sheens of purple, green and orange when viewed in bright sunlight. With only about 420 wild Waldrapp ibis remaining, this is one of the world’s most critically endangered avian species.  But thanks to a very successful breeding and release program, there are over 1,100 Waldrapp ibis in captivity, and offspring from zoos are being released back to the wild.

For a list of AZA-accredited zoos and aquariums where you can see some of these incredible birds in person, visit the AZA website: http://www.aza.org/SpeciesBeingSaved.

About the Palm Beach Zoo & Conservation Society: The Zoological Society of the Palm Beaches exists to inspire people to act on behalf of wildlife and the natural world. We advance our conservation mission through endangered species propagation, education and support of conservation initiatives in the field. Our commitment to sustainable business practices elevates our capacity to inspire others. 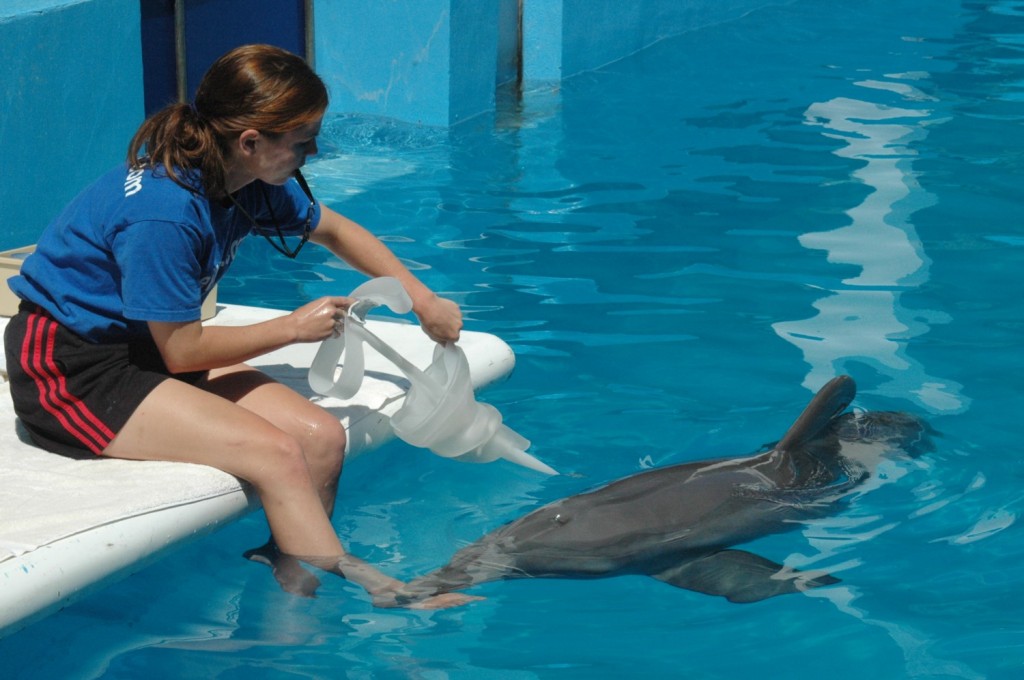 The dolphin Winter, made famous for the breakthrough rehabilitative work that Clearwater Aquarium did to create a prosthetic tail that saved the dolphin’s life, here in 2008 getting her prosthetic tail on, also saved the aquarium and its important work © 2014 Karen Rubin/news-photos-features.com

The Responsible Travel industry is turning its sights on animal welfare.

This issue will figure into the keynote address by Dr. Martha Honey, CREST Co-Director, at TBEX North America, which will be held September 11 – 13, 2014, in Cancun, Mexico.

In advance of her speech she has been asked to comment on an ongoing debate about captive dolphin tours in Cancun. Here is how CREST views the issue:

“Respecting animal welfare is an essential component of responsible travel. CREST believes that when at all possible, wildlife should live in their natural habitats.”

If wild animals are held in captivity, they should be guaranteed, at minimum, the following ‘Five Freedoms’:

An opportunity to exhibit natural behaviors

Protection from fear and distress

(Check out Born Free UK’s Guide to the 5 Freedoms, which discusses the Five Freedoms in detail in the context of captive wild animals.)

Dolphins are socially complex and self-aware creatures, and we agree with World Animal Protection in that these animals “deserve to live a life free from captivity, where they can properly fulfill their social and behavioral needs.” A tank simply cannot provide them with the space, environment, and social freedom they need to thrive as they would in the wild.

The tour operator Intrepid Travel, a highly respected leader in responsible travel, has set a guideline that it is best to view wildlife where it belongs, but if a zoo or aquarium is ever visited, a visitor should make sure the facility adheres to the World Association of Zoos and Aquariums’ Code of Ethics before entering.

Also, interactions with wild animals should never involve physical contact with people, feeding, or other actions that disturb or alter their natural behavior. These actions often cause extreme distress for the animal and are health risks for both parties.

On the issue of captive marine animals, President Mark Spalding says, “We have admirable facilities that rescue and when possible rehabilitate and release marine mammals, sea birds and sea turtles. Some of these allow the public to visit and volunteer. And, many have advanced our knowledge of marine wildlife through research during their recovery.

“But like hospitals for humans, this is not where we want wild animals to spend their entire lives. We prefer to see them in the wild where they thrive.”

CREST works frequently in close collaboration and partnership with The Ocean Foundation.