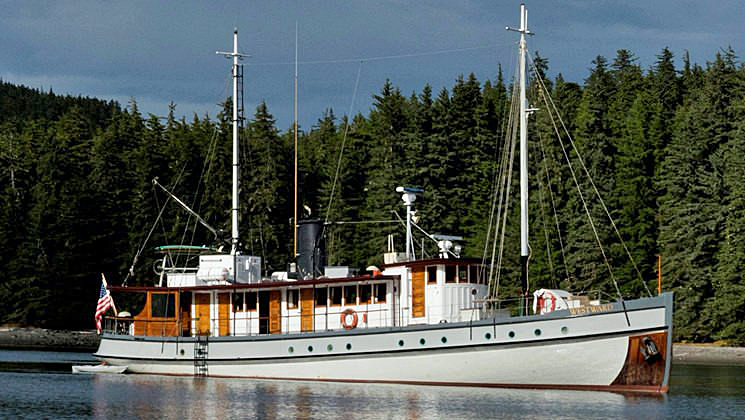 Launched in 1924 as the flagship of the Alaska Coast Hunting and Cruising Co., she is arguably Seattle’s most famous motor yacht having pioneered hunting, fishing, and adventure travel in the remote regions of Washington, British Columbia and Alaska.

“Westward Voyages in the Sea of Cortez, launching January 2015 is our perfect complement to an already outstanding portfolio of Baja small Ship Cruises,” said Todd Smith, AdventureSmith Explorations’ Founder/Owner. Ten-day itineraries featuring both the Sea of Cortez and whale watching in the Pacific’s San Ignacio Lagoon are offered in January and February 2015.

Smith likened cruising the eco systems of the Baja Peninsula to cruising the islands of the Galapagos. Both regions offer explorations of geography, flora and fauna, bird and wildlife. Both regions are UNESCO World Heritage Sites.

Westward Voyages in the Sea of Cortez spends seven days cruising in the Sea of Cortez with three days watching gray whales based from Kuyimita Tent Camp adjacent to San Ignacio Lagoon Whale Sanctuary. The resulting 9-night/10-day cruise/tour is the most in-depth and intimate Baja exploration available. The per person double rate is $5,750. See: www.adventuresmithexplorations.com/westward-voyages-in-the-sea-of-cortez .
Westward will ply the pristine waters of Baja in the coolest months in order to enhance the cruise experience that includes the cacophony of leaping rays, spouting whales, acrobatic dolphins and chirping bird song from the dawning shore.

Guests and crew gather on the 17 by 14-foot shaded back deck for meals and conversation.  Each stateroom has three portholes that open. In addition each bathroom has one opening port. Staterooms are outfitted with a portable, battery-powered fan to provide a breeze on still nights. The air may be warm and dry in the Gulf of California winters, but the water is cool and helps offset the warmth of the day, especially in staterooms that extend below the waterline.

Other cruise programs on ships for up to 84 guests are available. (See: www.adventuresmithexplorations.com/baja-california).

Westward is listed with the US National Register of Historic Places and remains dependably powered by her original Atlas Imperial Diesel Engine. Westward’s historical and adventurous spirit enriches the voyages of those lucky enough to cruise the waters with her. Modeled after a salmon cannery tender, she launched in 1924 as the flagship of the Alaska Coast Hunting and Cruising Co. Westward served a noteworthy clientele of hunters and fishermen for nearly 20 years. Distinguished guests included Bing Crosby, Walt Disney, E.F. Hutton, John Wayne, Dean Witter and numerous other VIP’s of the era. During WW II Westward served as a patrol boat off the California coast before returning to the Pacific Northwest. See: http://www.adventuresmithexplorations.com/westward

Founded in 2003, AdventureSmith Exploration has become a global leader in small ship, expeditionary cruise vacations. Company president and founder Todd Smith pioneered the concept of wilderness cruising – combining the comforts of a small cruise ship with the adventure of sea kayaking and exploring ashore in remote wilderness areas. In 2012, Smith joined the ranks of Conde Nast Traveler’s prestigious 14th Annual Travel Specialists List as the world’s expert on small ship expeditions, and again in 2013 and 2014. For information, availability and 2015 reservations, 800-728-2875 or visit www.adventuresmithexplorations.com.