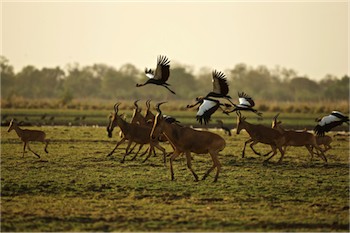 Passage to Africa is inviting solo travelers to join two departures of its safari to Chad’s Zakouma National Park.

The expedition, limited to a maximum of eight guests on only 16 safaris a year, starts with a night at the 5-star Kempinski Hotel in N’Djamena, Chad’s capital and largest city. Then travelers will charter to Zakouma for a seven-night all-inclusive stay at Camp Nomade.

Camp Nomade is an upmarket mobile camp that allows guests to explore numerous paths and rivers across the 3,000 square kilometers of Zakouma Park. The wildlife experience rivals anything else in better-known safari Africa and perhaps more crucially, the park retains the ineffable sense of being truly wild.

Zakouma National Park, one of Africa’s most exotic, vibrant and unexplored areas of Africa is home to 66 mammal species and 374 bird species, highlights include:

Walking with the iconic elephant herd

The constant presence of northern carmine bee-eaters, like splashes of fire across the sky; a photographer’s dream

Encounters with predators both large and small

“A journey to Zakouma is like going back to an Africa that was 30 years ago; to have one’s senses ignited and to be inspired…and at the same time, to make a real contribution to conservation,” said Michael Lorentz, co-founder and CEO of Passage to Africa. “It is the personalization of the experience and its uniqueness, experientially, culturally and spiritually, that transports us. The rewards are infinite – beneath the rough exterior lies a wealth of warmth and undiscovered natural wonders.”

“News about Boko Haram’s involvement near Chad may be alarming, but issues have only occurred in areas at the far west of the country, more than 500 hundred miles away from Zakouma National Park in the east. Passage to Africa guides monitor these issues very closely and if there is any threat to the safety of the guests, the trip will be cancelled and all money will be refunded,” the company stated.

Passage to Africa is a premier safari company comprised of some of the most respected African safari specialists including Michael Lorentz, who started the bush career in South Africa’s Timbavati Game Reserve in 1985. He gained fame for creating Elephant Back Safaris in Botswana in 1991 before starting Passage to Africa in 2000, where he and his fellow guides are legends for family and solo adventure, conservation and historical safaris to Africa and beyond.