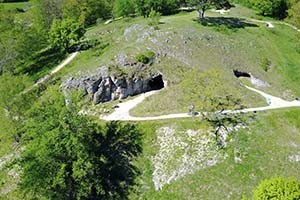 Some 35 to 40,000 years ago, humans took up residence in six caves in the Swabian Jura, and left behind unique evidence of their creative endeavours. These are the oldest works of art and musical instruments yet discovered anywhere in the world. Hailed as an archaeological sensation, the caves featuring the oldest Ice Age art were added to the list of World Heritage Sites in 2017.