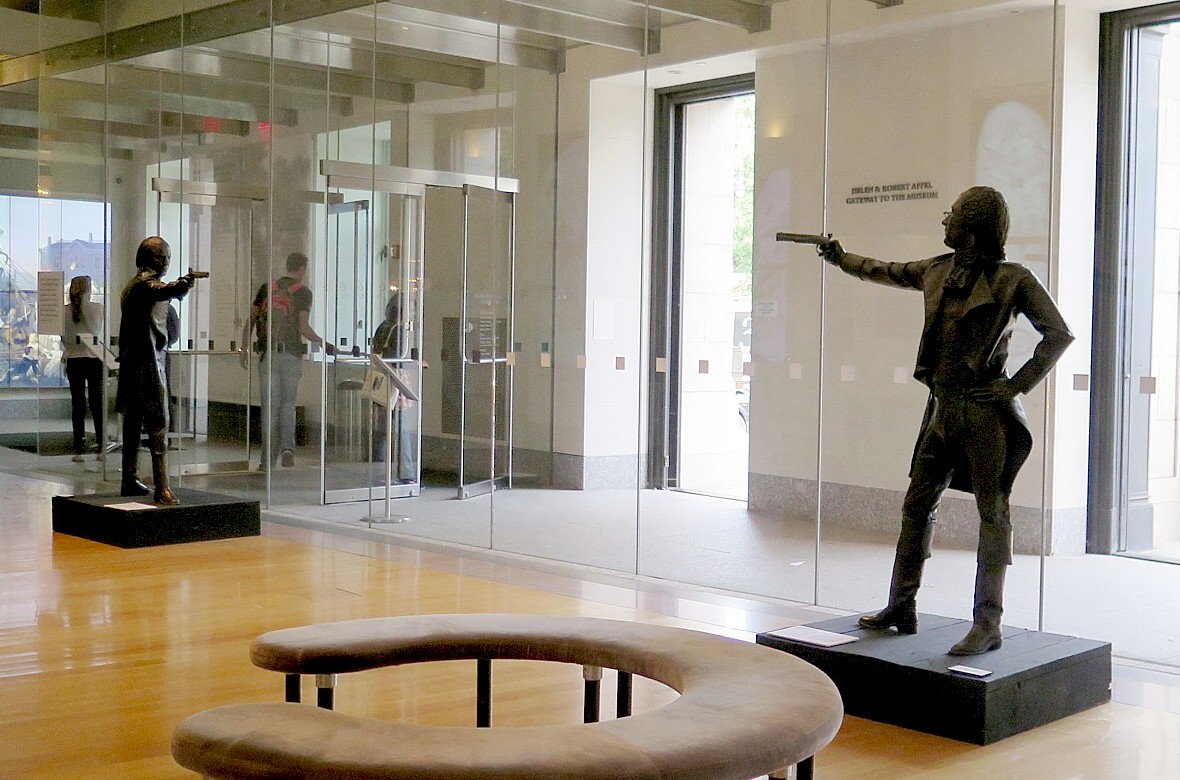 Statues in the lobby of the New-York Historical Society re-create the famous duel between Alexander Hamilton and Aaron Burr. The NY-HS was founded in 1804, the oldest museum in New York City © Karen Rubin/goingplacesfarandnear.com

New York, NY –To commemorate the 50th anniversary of the assassinations of Martin Luther King Jr. and Robert F. Kennedy in 1968, the New-York Historical Society presents an exhibition of photographs and artifacts honoring these visionary leaders who irrevocably changed the United States. On view February 16 – May 20, 2018, Rebel Spirits: Robert F. Kennedy and Martin Luther King Jr. showcases approximately 60 photographs and 30 documents and artifacts that uncover the relationship between these historic figures.

Martin Luther King Jr. (January 15, 1929 – April 4, 1968) and Robert F. Kennedy (November 20, 1925 –June 6, 1968) were born worlds apart—culturally, geographically, racially, financially, and politically—but by the time they were killed within months of each another in 1968, their worlds had come together. As their respective concerns expanded beyond civil rights and organized crime, their ties deepened to encompass shared interests in supporting the poor and opposing the war in Vietnam. This unprecedented exhibition explores the overlapping paths of their lives through images taken by some of the most renowned photojournalists of the era, including Bob Adelman, Danny Lyon, Henri Dauman, Jacques Lowe, Spider Martin, Steve Schapiro, Lawrence Schiller, and Paul Schutzer, alongside original correspondence, publications, and ephemera.

“The year 1968 rocked the nation in many ways, but it would be difficult to point to anything that shocked and sickened Americans more that year than the senseless and tragic deaths of Robert Kennedy and Martin Luther King Jr.,” said Dr. Louise Mirrer, president and CEO of the New-York Historical Society. “Fifty years later, the legacies of Kennedy and King still reverberate. This timely exhibition underscores the two men’s lasting impact on our nation while drawing attention to the ways in which their lives intersected. ”

Exhibition highlights include images of King and his son looking at the charred remains of a cross the Ku Klux Klan burned outside his Atlanta home in 1960, King’s mug shot after being indicted for the 1956 Montgomery Bus Boycott, and Kennedy being swarmed by an adoring crowd during his 1968 presidential campaign. Also on view are posters reading “Honor King: End Racism!” and “I Am a Man” that were carried in a Memphis march led by widow Coretta Scott King and her children on April 8, 1968, as well as a black and white “Kennedy/King” button worn by a New Yorker in memory of the two slain leaders. An adjunct display showcases the bronze sculpture of Martin Luther King Jr.―one of five existing casts created by Harlem Renaissance artist Charles Alston (1907– 1997), on loan from the Community Church of New York.

Rebel Spirits is based in part on The Promise and the Dream, written by David Margolick and produced by Lawrence Schiller for National Geographic Publishers. The exhibition was curated by Lawrence Schiller, Cristian Panaite, and Marilyn Kushner. It was produced by Wiener Schiller Productions, Inc. in association with Susan Bloom International with support from Getty Images, The Jacques Lowe Estate, and Steve Schapiro.

Published by National Geographic and written by Vanity Fair contributing editor and New York Times writer David Margolick, The Promise and the Dream: The Interrupted Lives of Robert F. Kennedy and Martin Luther King Jr. features an introduction by historian Douglas Brinkley. The book will be available at the NYHistory Store.

Several public programs will provide further insights into the exhibition and its time period. On March 6, eminent legal experts survey the evolution of the U.S. Supreme Court’s interpretations of the 14th Amendment—in commemoration of its 150th anniversary—and civil rights throughout American history, highlighting landmark cases such as Brown v. Board of Education. On April 23, scholar Randall Kennedy discusses the Supreme Court and Martin Luther King Jr. On May 21, journalist Chris Matthews sits down to explore the rebel spirit of Robert Kennedy.

The New-York Historical Society, one of America’s preeminent cultural institutions, is dedicated to fostering research and presenting history and art exhibitions and public programs that reveal the dynamism of history and its influence on the world of today. Founded in 1804, New-York Historical has a mission to explore the richly layered history of New York City and State and the country, and to serve as a national forum for the discussion of issues surrounding the making and meaning of history.

Like Loading...
« 2018’s Best Places to Find a Job – WalletHub Study
Ride & Seek Mounts 1,787 Mile Cycling Tour from Barcelona to Rome, in the Footsteps of Hannibal »