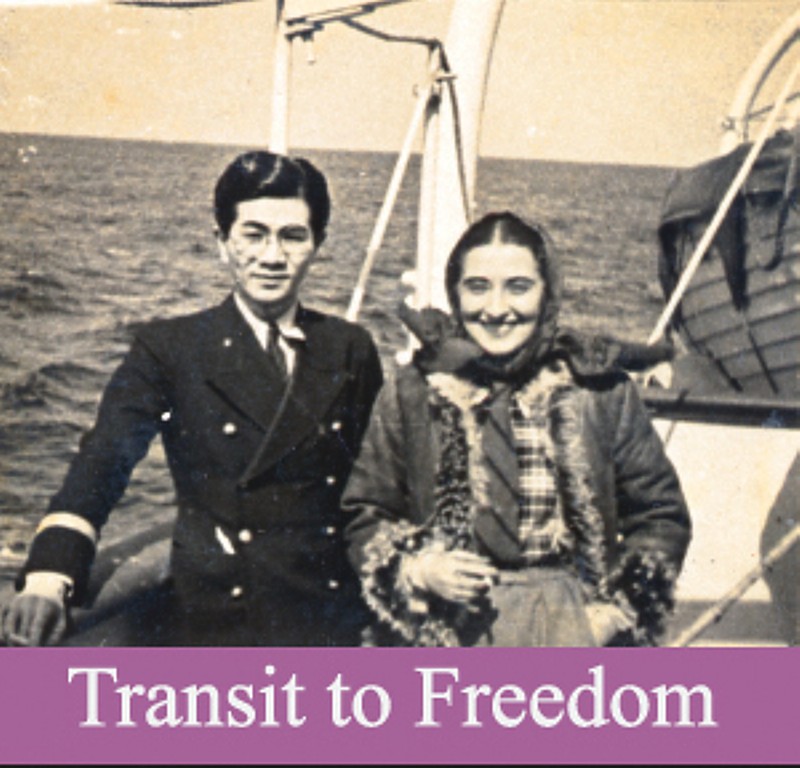 The documentary “Transit to Freedom,” produced by the Japan National Tourist Office sparked a Jewish heritage tour of Japan of sights related to destinations associated with Japanese Vice-Consul Chiune Sugihara in Lithuania, known as Japan’s Oskar Schindler, who issued the transit visas for 6,000 European Jews, saving them from Nazi extermination.

A portrait of an unknown Jewish woman featured in a short documentary film of the history of Japan tourism has been identified by her own children.  The film was originally intended to trace the modern history of Japan tourism, but the photo led to discovery about the oldest Japanese travel agency’s little known role in helping Jewish refugees escape from Europe to the United States and is being used to cultivate more Jewish travel to Japan.

As Japan National Tourism Organization (JNTO) was researching the past 100 years of Japan tourism, there was an unexpected finding from World War II that showed Japanese involvement in helping Jewish refugees escaping Nazi Europe.

The finding led to a documentary, as well as a Jewish Heritage tour of Japan. And the documentary led to the identification of a Jewish woman by her children.

The documentary “Transit to Freedom” was a collaboration of the New York Film Academy   and JNTO, and was premiered at Japan Week, the tourism promotional event at Grand Central Terminal in New York City in March 2014. The screening as well as the coverage in the New York Times, ignited public attention to the documentary, and the documentary was made available online to reach a wider audience.

The film was based on a true story in a book by Akira Kitade, a former executive at JNTO, that his former boss went through during the wartime.

Kitade’s former boss was assigned to escort European Jews when Japan Tourist Bureau (the predecessor of the Japanese travel agency, JTB Corp.) was contracted to transport them through the rough water of Sea of Japan between Vladivostok of the Soviet Union and a Japanese port city of Tsuruga.

The Jews on this ship were on so-called Sugihara visa, which was the transit visa signed by a Japanese Vice-Consul Chiune Sugihara in Lithuania, known as Japan’s Oskar Schindler, who issued the transit visas for around 6,000 European Jews, even if it was against the order from the Japanese government under the Tripartite Pact between Japan, Germany and Italy.

I became familiar with Chiune Sugihara, during an exhibit, “Diplomats of Mercy,” organized by the Harriet and Kenneth Kupferberg Holocaust Resource Center and Archives at Queensborough Community College at the Village of Great Neck Plaza. “‘In a conspiracy of goodness,’ Sugihara persuaded Soviet officials to let Jews with Curacao visas pass through Japan. The Japanese government refused, but he did it anyway, signing 2,000 visas by hand before the consulate was closed by Soviets. After the war, he was dismissed from the foreign service as retribution.”

Sugihara and his wife Yukiko, are honored as “Righteous Gentiles” for their efforts to save Jews during the Holocaust (see www.jewishvirtuallibrary.org/jsource/Holocaust/sugihara.html).

While escorting Jewish refugees across the Sea of Japan, the Japanese travel agent received seven portraits from the refugees as a token of gratitude.

Inspired by this first-hand story, Kitade submitted copies of these photos to the Holocaust Martyrs’ and Heroes’ Remembrance Authority, Yad Vashem in Jerusalem.  One of the portraits posted on the Yad Vashem’s website caught the attention of a Montreal resident Judith Lermer Crawley, a daughter of Sugihara Visa’s recipients.  She perceived an undeniable resemblance to her late aunt, Sonia Reed (maiden name Zosia Gertler) in the young girl, and was convinced when she read the New York Times article on Transit to Freedom in March.

She contacted her three cousins who are Sonia’s surviving children in the United States and Aya Takahashi, a Vancouver-based journalist, who sent the web link of the documentary to them.

When they saw the 73-year old photo in the film, they immediately recognized the girl on the screen was their late mother.  “My first reaction was one of surprise and amazement, chills and goose bumps.  I know my sister and brother had the same reaction…  I was struck by how young, beautiful, sad and vulnerable she looks in the photo, and was greatly moved by it,” says Deborah Reed, one of Sonia’s daughters.  “I was greatly moved by what she wrote on the back (of the photo). [She wrote in Polish, “Remember me – to the nice Japanese person.”]  To me, this speaks to the kindness of the Japanese people who were helping her and to her own feelings of uncertainty about her fate.  It brings home both the tragic and difficult circumstances she found herself in, and her great good fortune in being helped, actually saved, by the Japanese people.”  After finding a safe haven in Japan, many refugees were able to travel on to the United States and Sonia was one of them.

Deborah knew that her mother had escaped from Poland through Russia and Siberia to Japan, but she knew few of the details as Sonia almost never spoke to her children about her experience before and during the war years, though she remembers her saying how kind the Japanese people were to her.  “The photo and the documentary gives me a window into her experience, makes it more “real” and profound to me than it had been.  My own reaction (to this film) was, and is, a richer understanding of my mother’s experience, and very deep gratitude to Mr. Sugihara and the many other Japanese people who helped my mother and other Jewish refugees escape from Europe, survive and go on to create meaningful lives for themselves and their families.”

According to Sonia’s son David, his parents owned a small factory on Long Island, NY and they had a business trip to Japan in 1979.  “They were extremely enthusiastic about their visit.  They very much appreciated the Japanese culture.  They were impressed by the (Japanese) industriousness and serious dedication to customer satisfaction…While my father evaluated the equipment, my mother supported his decision to purchase from a Japanese company.  They were both very dedicated to America and frankly reluctant to purchase from a non-American source…It shows how appreciative she was of Japan that she endorsed this –for them a very major – transaction.”

In addition to Kitade, Rabbi Marvin Tokayer, an expert on Jewish history in Asia and the author of “The Fugu Plan” (co-authored with Mary Swartz) as well as Dr. Sylvia Smoller who experienced the hardship firsthand and has written a book based on the lives of her parents,are interviewed.

You can view the documentary film “Transit to Freedom: How Ordinary Japanese Citizens Helped Jewish Refugees in WWII” here.

“With this film, we hoped to help shine a light on a little known story of Japanese helping Jewish refugees during World War II,” said documentary director Michael Young.  We were captivated by compassion and bravery shown by Vice-Consul Chiune Sugihara and by the members of the Japan Tourist Bureau.  Despite their government’s close alliance with Hitler, individual Japanese opened their doors and their hearts to these homeless and persecuted Jews.”  The New York Film Academy wishes to celebrate this story, and welcomes Japanese students and students from all over the world to shine their lights on other stories and make films to share with the world.

JNTO hopes to identify the rest of the survivors in photos by encouraging people to view the film.  “We never had much opportunity to introduce our country to the Jewish community before, so we would be delighted if they feel intrigued by the film to know more about Japan,” says Yuki Tanaka, the executive director of JNTO New York Office.  “Not many people know this but if you look back at the history, Japan has a surprisingly long relationship with Jewish people, so please come visit my country to discover an amazing link between us.”

Japan National Tourism Organization (JNTO) is a nonprofit tourism board committed to the promotion of inbound tourism to Japan.  For information on travel to Japan, visit www.japantravelinfo.com.