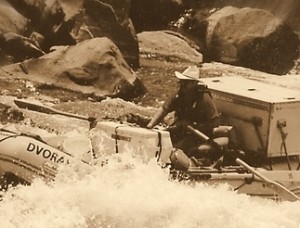 Bill Dvorak’s rafting expedition on Utah’s Green River will have an unusual twist, with live bluegrass music performed by The Hayward Strangers.

Banjo music strumming down Utah’s wild and scenic Green River will be a distinctive feature on Bill Dvorak’s rafting expedition this September, with live bluegrass music performed by The Hayward Strangers. The trip is also a fundraiser for the National Wildlife Federation.

A fifth generation cousin of the famous composer, Anton Dvorak, Bill Dvorak has been running rivers commercially longer than anyone else in Colorado (he owns the first rafting outfitter license issued by the state of Colorado).  With a personal penchant for bluegrass music and an acoustically outstanding natural setting to perform in, the 2014 ‘Green River Roustabout’ was born.

“The Hayward Strangers will blend with the sweet chorus of birds, rippling sounds of the river and the drum roll of the rapids,” Dvorak muses. “Guests will join one of Colorado’s hottest bluegrass bands on a six day journey as they perform daily concerts under natural canyon walls and amphitheaters and along broad sandy beaches.”

Dvorak has also planned for ample leisure time allowing down moments to just soak up the sun, read, float along the river and listen to some impromptu jam sessions. In addition to rafting and music, there are side excursions to ancient Fremont Indian ruins, petroglyphs, and wildlife viewing. “You can play with stand-up paddle boards, inflatable kayaks, have a Bocce ball tournament, swim, fish, and wear out your camera battery taking spectacular photos!”

The trip is scheduled Sept. 13-18, 2014 and departs from Grand Junction, CO or Green River, UT.  The adult rate is $1,498 per person (for youth under 12 $1,350) plus additional shuttle flight to the put-in ($190 per person), taxes and government fees. Trip cost will include all meals, rafting and safety equipment, professional guides and staff.

This concert journey is also a fundraiser for the National Wildlife Federation (NWF). Dvorak and The Hayward Strangers are donating 15 percent of the fee to the national conservation nonprofit for its work in protecting and preserving wildlife habitat.

“The idea for the bluegrass journey first emerged following a conversation I had with Phil Hanceford (mandolin player) at a NWF conservation event,” explains Dvorak. “One year later, six members of the band agreed to sign on and the first such music adventure of its kind is happening.” 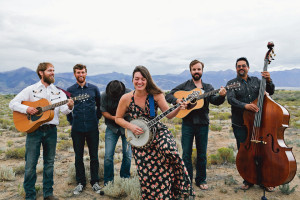 Each night guests and performers will mingle over campfire conversation, laughter and singing enjoying a variety of guide/chef-prepared dinners such as blackened salmon, charbroiled steaks, organic salads, garden vegetables and Dutch oven desserts such as Black Forest cake and strawberry shortcake, accompanied by hors d’oeuvres and vintage wines.  Special diets and allergies can be accommodated).

Bill and Jaci Dvorak have been operating Dvorak Raft, Kayak and Fishing Expeditions since 1979. As one of the early pioneers of white water river rafting in the Rocky Mountains, the Dvoraks own the first outfitter license issued by the state of Colorado. Their river trips, white water skills camp and swift water training programs are world renowned and have been featured in National Geographic, the Chicago Tribune and seen on ESPN and various television specials. Bill Dvorak recently received the conservation award from American Rivers as the “River Champion of the West”.