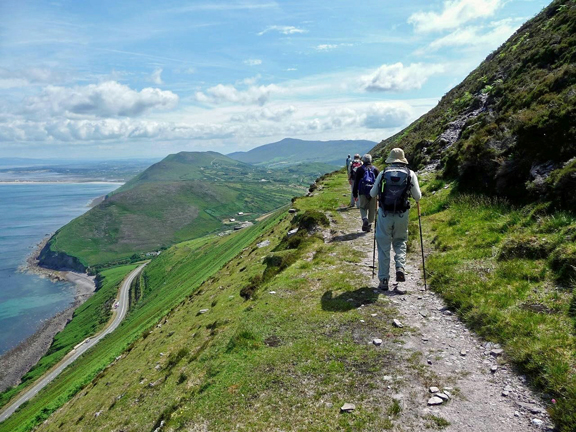 A stage coach route, dubbed the “Ring of Kerry,” created in 1815 through historic villages and sites in southwestern Ireland’s County Kerry is the destination 200 years later of 8- and 11-day self-guided hikes by adventure travel specialist Ireland Walk Bike Hike.

Dubbed the Ring of Kerry after the popular 179-km-long circular tourist route of the same name, this is a signature program designed and operated by Ireland Walk Hike Bike, (formerly known as South West Walks Ireland) that was started in 1994 by Linda Woods

This is a self-guided, independent walking tour with guests following a pre-ordained route equipped with detailed route descriptions, maps and pre-arranged accommodations (with full Irish breakfasts) booked in advance by Ireland Walk Hike Bike. Guests have the convenience of 24-hour emergency support and telephone back up. Luggage is moved ahead of the walkers to their next destination.

Kerry’s special character is drawn from its unequalled diversity of land and seascapes while its offshore islands add yet another dimension to the beauty of the coastline frequently dotted with castles, forts and watchtowers. Warm summers and mild winters produce many sub-tropical and alpine species of flora while the temperate ocean waters, heated by the Gulf Stream, produce magnificent underwater vistas with whales, dolphins, seals and even turtles being frequent visitors.

The Ring of Kerry traces the coastline of the Iveragh Peninsula beginning in the Oak Woods of Killarney National Park, followed by the picture-postcard towns of Kenmare, Sneem and Glenbeigh before taking a step back in time at historic Derrynane House.

Guests walk an average of 20 km a day. Access for this holiday can be from Dublin, Cork or Shannon airports with bus and/or train connections available to Killarney year round.

On July 6, 1815, Charles Bianconi introduced his first horse-drawn carriage for passengers in Ireland, thus launching Ireland’s public transport system. He was able to establish regular horse-drawn carriage services from major towns and villages. Buses and coaches were commonly called “Bianconi’s” well into the 20th century.  This route, which precedes railways, is a unique way to travel Ireland seeing the sites that travelers saw 200 years ago.

Ireland’s fabled County Kerry consists of a series of spectacular mountainous peninsulas divided by deep sea inlets. MacGillycuddy’s Reeks form the centerpiece of the Ring of Kerry, a 179-kilometer circuit from Killarney, via Killorglin, Caherciveen, Waterville, Kenmare and back to Killarney across Moll’s Gap and past Ladies View – one of Ireland’s most famous viewpoints. Weaving between these points is a network of ancient paths that are nearly as old as the land itself, many of which form part of a long-distance track known as the Kerry Way.

The name ‘Kerry’ comes from the Old Irish word Ciarraige meaning the people of Ciar, an early Celtic tribe that settled in the area around 300 BC. In fact, Kerry has an outstanding collection of historical and archaeological sites that date back over 7,000 years, with several ancient forts and numerous early Christian churches. Impossibly green pastures stretch as far as the eye can see, completely empty save for small herds of sheep or goats, and at almost every turn there are spectacular views of mist-covered mountains and wild stretches of uninhabitable coastline where deep fissures have been carved, over the eons, by the pounding waves of the Atlantic Ocean.

Here and there along the coast, pretty fishing villages, such as Caherdaniel and Portmagee, have successfully withstood the elements and offer a picturesque contrast to the verdant hills that surround them. The Skellig Islands lie 8 miles off the tip of the peninsula, two rocky peaks rising sheer out of the Atlantic Ocean. Skellig Michael is a world heritage site on account of its 6th century monastery, with beehive huts, oratories and inscribed crosses. Seabirds abound as well. Small Skellig is home to over 40,000 gannets, the second largest colony in the world.