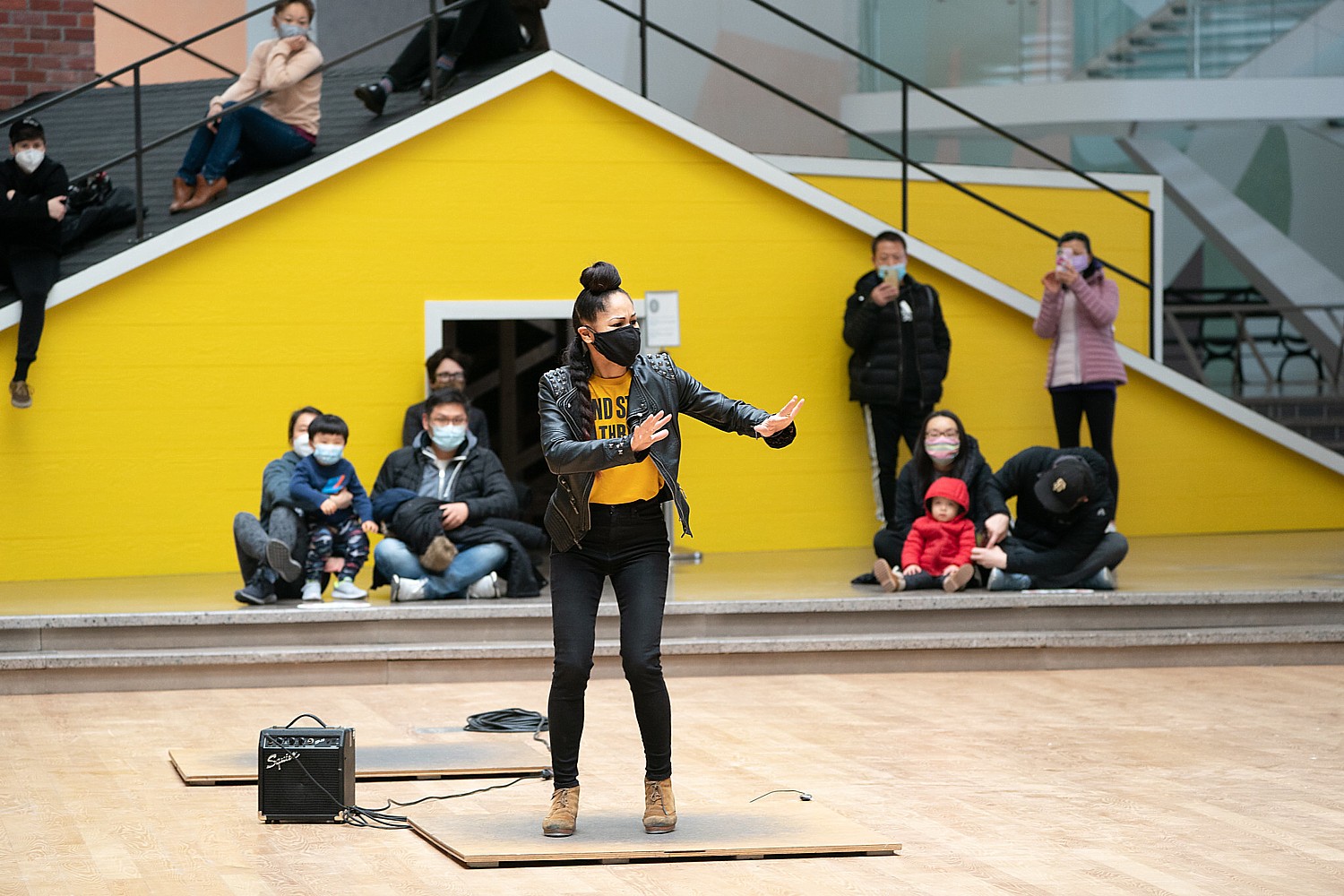 NY PopsUp, an unprecedented and expansive festival featuring hundreds of pop-up performances, many of which are free of charge and all open to the public, is now running in various locations through Labor Day. The series – some 300 events across New York City and state in the next 100 days – is intended to revitalize the spirit and emotional well-being of New York citizens with the energy of live performance while jumpstarting New York’s struggling live entertainment sector.

The Festival, a private/public partnership overseen by producers Scott Rudin and Jane Rosenthal, in coordination with the New York State Council on the Arts and Empire State Development,  serves as a “pilot program,” creating the state’s first large-scale model for how to bring live performance back safely after this prolonged COVID-related shutdown.

The programming for NY PopsUp is curated by the interdisciplinary artist Zack Winokur, in partnership with a council of artistic advisors who represent the diversity of New York’s dynamic performing arts scene. NY PopsUp is running through Labor Day. The Festival will reach its climax with the 20th Anniversary of the Tribeca Film Festival and The Festival at Little Island at Pier 55, bringing the total number of performances to more than 1,000. NY PopsUp is being coordinated in lock step with state public health officials and will strictly adhere to Department of Health COVID-19 protocols.

“Cities have taken a real blow during COVID, and the economy will not come back fast enough on its own – we must bring it back,” Governor Andrew Cuomo said.”Creative synergies are vital for cities to survive, and our arts and cultural industries have been shut down all across the country, taking a terrible toll on workers and the economy. We want to be aggressive with reopening the State and getting our economy back on track, and NY PopsUp will be an important bridge to the broader reopening of our world-class performance venues and institutions. New York has been a leader throughout this entire pandemic, and we will lead once again with bringing back the arts.”

The events produced by NY PopsUp, in addition to being free of charge, will be staged across every type of neighborhood and district in all five boroughs of New York City, throughout Long Island and Upstate New York, and in all regions of the state. As the current realities of COVID-19 make mass gatherings and large, destination-style events impossible, NY PopsUp will meet New York City and State residents where they are, infusing their daily lives with the surprise and joy of live performance. The hundreds of free, pop-up events that constitute NY PopsUp will make stages out of New York’s existing landscapes, including iconic transit stations, parks, subway platforms, museums, skate parks, street corners, fire escapes, parking lots, storefronts, and upstate venues, transforming everyday commutes, local communities, and locations never used for performances into canvases of awe and exhilaration. Instead of there being masses of audience members at a handful of events, this Festival is a mass of events, each for a safe and secure ‘handful’ of audience members.

Rudin and Rosenthal said, in a joint statement, “As two lifelong New Yorkers, it has been utterly devastating to see our creative community brought to an absolute standstill for a year. It’s inconceivable. We both spend our lives generating opportunities for artists, so we were both thrilled to be asked by Governor Cuomo to try to ignite a spark to bring art and performance back to life for the State. The passionate enthusiasm of every person we asked to join us in this incentive is going to make this a labor of both love and invention. We’re honored to be spearheading this campaign. Frankly, our most profound hope is that by the time NY PopsUp culminates on Labor Day, New York will be fully on the way to being reopened and revitalized and that this initiative, having served its purpose, will no longer be necessary. It’s the spark, not the fire — the fire is the complete return of all the arts, in their full glory, standing as they always have for the rich, emotional life of the city and state in which we both live.”

During the run of the festival, NY PopsUp will grow in its scale, volume of performances, and geographical footprint, with events throughout New York State, from the Bronx to Staten Island, from Buffalo to Suffolk County, from the Hudson Valley to the Capitol.

NY PopsUp will reach its apex over the summer, celebrating both the 20th Anniversary of the Tribeca Film Festival (June 9 through 20) and the opening of one of New York’s most highly anticipated projects: Little Island (June).

The Tribeca Film Festival was founded by Rosenthal and Robert DeNiro in the aftermath of 9/11 to revitalize Lower Manhattan. Tribeca has come to symbolize the resilience of New Yorkers, the importance of our artistic communities, and their impact on the economic activity of our city. This year’s 20th event will be the first in-person film festival in the entirety of North America since the pandemic began to host its filmmakers and their premieres in front of a live audience. With over 300 ticketed and non-ticketed events, the film festival will have screenings, panel discussions, concerts, and more, in parks, on piers, on buildings, and on barges. Tribeca will reach all five boroughs in celebration of the spirit of New York with a closing night celebration of Juneteenth.

The idea for Little Island, a soon-to-open, first-of-its-kind public park on the Hudson River that merges nature and art, was dreamt up as a solution to repair and reinvigorate New York’s West Side after the destruction wrought by Hurricane Sandy. A Diller – von Furstenberg Family Foundation project, this is yet another example of the unique power of the arts to revitalize New York in the aftermath of crisis. Little Island, which will begin hosting performances in June, will serve as a permanent, year-round home for easily accessible, multidisciplinary programming, and it will continue bringing artists and audiences together long after NY PopsUp hosts its final performance. Little Island will host its own festival, The Festival at Little Island, in conjunction with the final weeks of NY PopsUp. The Festival at Little Island, which kicks off August 11, 2021 and runs through September 5, will host an average of 16 events per day, for a total of 325 performances by approximately 500 artists.

More details about NY PopsUp will be announced soon. Please note that, given the impromptu nature and surprise element of the pop-up format, not all performances will be announced in advance. Please follow @NYPopsUp on Twitter and Instagram for the latest.

The first performances include, among others still to be announced, the following:

The series began on Saturday, February 20 with members of the artists council leading a performance at the Javits Center as a special tribute to our healthcare workers. The performance featured Jon Batiste, Anthony Roth Costanzo, Cecile McLorin Salvant, Ayodele Casel, and additional special guests joining forces for a one-of-a-kind live performance.

Throughout the day, the performers traveled around New York City, meeting audiences at various locations throughout all five boroughs in courtyards, workplaces, parks, and street corners, at the footsteps of locations such as, Flushing Post Office, Elmhurst Hospital, and St. Barnabas Hospital. Saturday will conclude with one of Jon Batiste’s signature Love Riots beginning at Walt Whitman Park and ending at Golconda Playground in Brooklyn.

On Sunday, February 21, legendary choreographer Garth Fagan’s company lead a special performance at the MAGIC Spell Studios at the Rochester Institute of Technology as a tribute for the staff who have made it possible for RIT to stay open and safe during the COVID-19 pandemic.

Patti Smith performing at the Brooklyn Museum in remembrance of the passing of Robert Mapplethorpe.

Partnership with “Works & Process” at the Guggenheim, that will take brilliant new performances beyond the famed Rotunda to locations around the boroughs. These collaborations include George Gershwin’s anthem to New York City, Rhapsody in Blue, performed by New York’s own pianist and composer, Conrad Tao, with new choreography by Caleb Teicher; The Missing Element, a beatbox and street dance collaboration, featuring Chris Celiz and Anthony Rodriguez’s “Invertebrate”; and Masterz at Work Dance Family performing a brand-new dance by choreographer Courtney ToPanga Washington.

A series of performances in storefront windows, amplified out onto the street, from artists Gavin Creel, J’Nai Bridges, Davóne Tines, Bobbi Jene Smith, Or Schraiber, and more.

A new live radio show hosted by Chris Thile, broadcast from stoops all over New York State, from Brooklyn and the East Village to the steps of Albany’s Empire State Plaza across from the Capitol building.

A series of dynamic and participatory performances created by Ayodele Casel taking place in the lobbies of free museums throughout the City of New York, including the Brooklyn Museum and Queens Museum.

NY PopsUp, the Tribeca Film Festival, and The Festival at Little Island will together bring a total of more than 1,000 performances to New York State, signaling an event unmatched in scale and unrivaled in scope.

As COVID restrictions begin to loosen, the model that NY PopsUp builds for holding safe live events will pave the way for the reopening of multidisciplinary flexible venues (“flex venues”) throughout New York State to open and participate in the Festival. These will be the very first indoor performances since the pandemic began and will mark a major moment in New York’s recovery efforts. Not only will these indoor events be a symbol to the entire world that New York is back, they will also be a key step in the long process of getting tens-of-thousands of arts professionals around New York State back to work; and a bridge to getting Broadway and all of the New York cultural world open. These Flex Venues are established performance spaces without fixed seating and are thus able to be adapted for social distancing. Examples of these venues would include The SHED, The Apollo, Harlem Stage, La MaMa, and The Glimmerglass Festival’s Alice Busch Opera Theater. All indoor events will strictly follow Department of Health public health and safety guidance.

“Having artists call on other artists as a means to build this festival’s giant creative community will spur opportunities for wild, bold, and intimate collaborations that would never otherwise have been possible. As a result, the work presented will represent a near limitless range, colliding disparate styles, disciplines, and points-of-view to infiltrate the daily lives of New Yorkers in genuinely surprising and unprecedented ways,” Zack Winokur said.”Ultimately, this Festival is about using art as a means of reestablishing human connection. With NY PopsUp, there is no mediating force between artist and artist, or artist and audience. It’s humans in direct contact with each other, and the context of this particular moment will make that connection all the more profound.”

The council of artistic advisors, who are all collaborating and co-curating NY PopsUp, is comprised of New York’s premier artistic visionaries, all hailing from different disciplinary backgrounds and each a leader in their own field. These advisors are charged with inviting other artists to join the NY PopsUp community. The artists they engage will, in turn, engage their own networks, ultimately populating the festival with the broadest, most diverse coalition of performers ever united around a single mission. In short, NY PopsUp is being built by artists asking artists to participate.