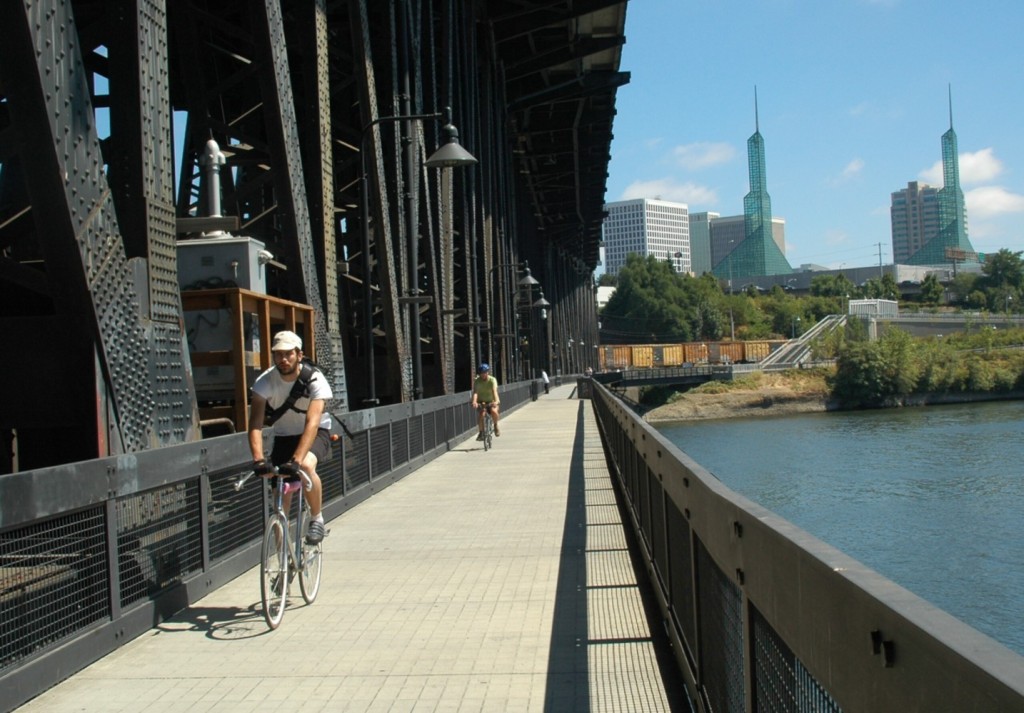 Portland, Oregon: a model of a “Green City” that is a delight to explore, especially by bike. The White House has just named Portland one of 16 “Climate Action Champions” © 2014 Karen Rubin/news-photos-features.com

I made my way to Portland, Oregon, precisely because of its reputation as a Green City – I wanted to see what that was like – and so enjoyed the light rail, the trees lining main street, the walkways and bikeways along the waterfront, rebuilt and reclaimed from industrial wasteland, warehouse districts revitalized converted to pleasant residential areas (what’s not to love about a city that prides itself on “bikes, books and brews”?). There was so much to explore and so much to enjoy – biking, hiking, its world-class zoo on a hilltop.

With Congress in the clutches of Republicans who are funded by Big Oil and deny climate change, it will fall to localities to act to mitigate and even reverse the conditions which are producing global warming.

That is why it is wonderful to see Portland, Boston, Broward County – destinations we have thoroughly enjoyed exploring -among the16 communities highlighted by the Obama Administration as “Climate Action Champions.”

(Broward County is interesting because the state of Florida has basically removed incentives to power plant companies like Duke Energy to mitigate carbon emissions, and is among the states that have removed and even banned incentives for solar energy, in the so-called “Sunshine State” no less. Florida has the biggest stake in mitigating climate change, because it will be the first to be submerged under water and uninhabitable when sea levels rise because of the planet’s warming. Farewell DisneyWorld.)

These communities are not just more liveable, but also are more pleasant to visit.

Next on our itinerary: San Francisco.

From creating climate-smart building codes to installing green infrastructure to setting targets for reducing energy consumption, the 16 local and tribal communities selected as Climate Action Champions have considered their climate vulnerabilities and taken decisive action to cut carbon pollution and build resilience. In addition to being designated as the first cohort of Climate Action Champions, the selected communities will benefit from facilitated peer-to-peer learning and mentorship and targeted support from a range of Federal programs. Furthermore, a coordinator will be provided to each Climate Action Champion to foster coordination and communication across the Federal agencies, national organizations, and foundations in support of the Champions. The coordinator will also assist efforts to raise awareness of funding and technical assistance opportunities that are available specifically for Climate Action Champions.

The 16 designated Climate Action Champions represent a diverse group of communities that are defining the frontier of ambitious climate action, and their approaches can serve as a model for other communities to follow. They are:

Today, the Administration also announced new resilience funding opportunities available to local communities across the country, including those designated as Climate Action Champions:

Specific examples of Federal support that will be available to the winning communities include:

Climate Education and Literacy Initiative. The Administration is also launching a new Climate Education and Literacy Initiative to help connect American students and citizens with the best available science-based information about climate change. The White House Office of Science and Technology Policy is hosting a roundtable at the White House today, bringing together education leaders from government, academia, philanthropies, non-governmental organizations, and the private sector to discuss efforts to increase student learning opportunities; equip educators with science-based information and resources; enhance climate-related professional development and training; and engage citizens through place-based and informal climate education. Today’s launch of the Initiative includes a host of exciting new commitments by Federal agencies and outside organizations to develop and deploy innovative climate education approaches aimed at educating and engaging students and citizens of all ages. Examples of these commitments include:

More information about the Climate Education announcement can be found here.

Hampton Roads Pilot Project.The Administration also announced that a one-day exercise was offered yesterday at Old Dominion University in support of an intergovernmental pilot project created by the Hampton Roads community. The exercise was a component of the National Exercise Program Climate Change Preparedness and Resilience Exercise Series, sponsored by the White House National Security Council, the Council on Environmental Quality, and the Office of Science and Technology Policy, and supported by the National Exercise Division. The Hampton Roads pilot project seeks to develop a regional government- and community-wide approach to sea level rise preparedness and resilience planning that can also be used as a template for other regions. This fall, similar preparedness and resilience exercises were held in Houston, Texas, Fort Collins, Colorado, and Anchorage, Alaska.

“From deep droughts to fierce wildfires, severe storms to rising seas, communities across the United States are already grappling with the impacts of extreme weather and climate change. Faced with these new challenges, many cities, towns, counties, and tribes in every region of the country are stepping up to cut carbon pollution, deploy more clean energy, boost energy efficiency, and build resilience in their communities to climate impacts.

“That is why earlier this fall the White House launched the Climate Action Champions competition, to identify and recognize local climate leaders and to provide targeted Federal support to help those communities further raise their ambitions. Following a competitive process led by the Department of Energy (DOE), today the Administration is announcing 16 communities from around the country as the first cohort of Climate Action Champions.

“The Obama Administration is committed to taking decisive action to combat climate change. Just last month, to drive international discussions leading up to the 2015 climate negotiations in Paris, President Obama made an historic joint announcement with Chinese President Xi Jinping of each country’s respective targets for reducing greenhouse gas emissions in the post-2020 period. Building on the United States’ bipartisan history of supporting financing for clean energy and climate adaptation in developing countries, the President also announced the United States’ $3 billion commitment to the Green Climate Fund.

“But international leadership begins at home, which is why the Obama Administration is continuing to partner with state and local governments, businesses, and philanthropic organizations to make progress on climate change in the United States. Building on the Administration’s work with the State, Local, and Tribal Leaders Task Force on Climate Preparedness and Resilience, which delivered its recommendations to the President on November 17, and the selection of the Climate Action Champions this week, the White House Office of Science and Technology Policy launched a new Climate Education and Literacy Initiative, and the Federal Emergency Management Agency (FEMA) and the White House collaborated on the fourth in a series of local climate resilience exercises in Hampton Roads, Virginia.”