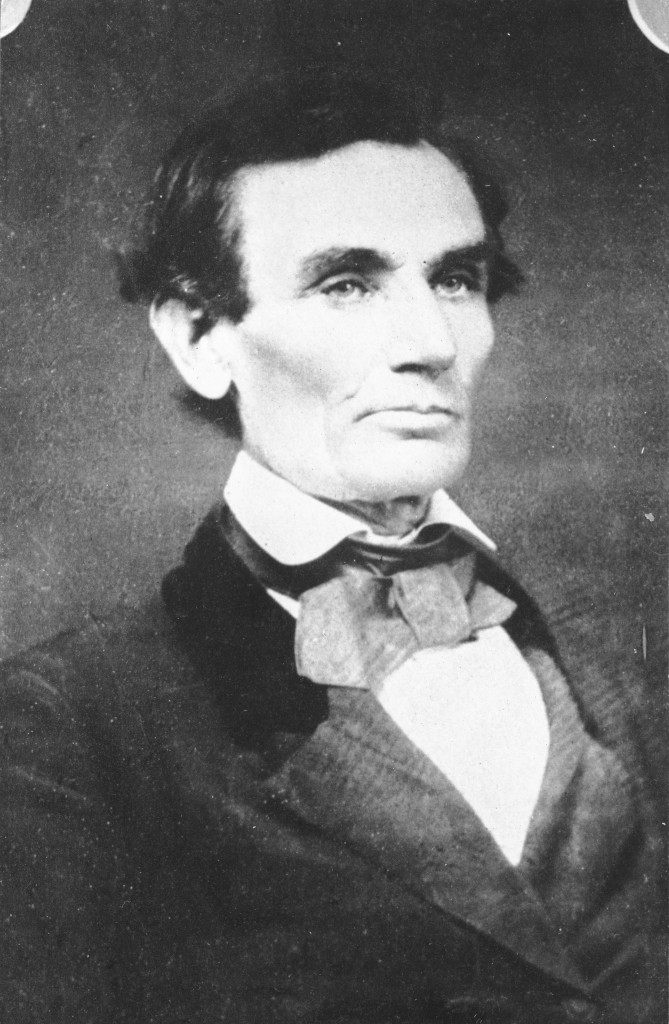 Samuel Alschuler, a Jewish photographer lent Lincoln his own velvet-trimmed coat for this photo taken in Urbana, Illinois, on April 25, 1858, just as Lincoln would begin his Senate campaign against Stephen Douglas. Lincoln would again sit for Alschuler two years later, after he was elected president.

Marking the 150th anniversary of the end of the Civil War and Abraham Lincoln’s assassination, the New-York Historical Society is presenting the exhibition Lincoln and the Jews, on view through June 7, 2015.

Through several never-before-exhibited original writings by Lincoln and his Jewish contemporaries, the exhibition will bring to light Lincoln’s little-known relationship with the Jewish community and its lasting implications for Lincoln, for America, and for Jews.

The exhibition is inspired by the publication of Lincoln and the Jews: A History (Thomas Dunne Books, March 2015), by Jonathan D. Sarna, Joseph H. & Belle R. Braun Professor of American Jewish History at Brandeis University, and Benjamin Shapell, founder of The Shapell Manuscript Foundation.

Lincoln and the Jews illustrates how America changed as its Jewish population surged from 3,000 to 150,000, and how Abraham Lincoln, more than any of his predecessors, changed America in order to accelerate acceptance of Jews as part of the mosaic of American life.

Showcasing more than 80 artifacts documenting the connection between Lincoln and Jews – including letters, official appointments, pardons, and personal notes, as well as Bibles, paintings and Judaica – Lincoln and the Jews traces the events in Lincoln’s life through the lens of his Jewish friends, such as his fellow lawyer and politician Abraham Jonas and his enigmatic chiropodist (podiatrist) and confidant Issachar Zacharie, as well as Lincoln’s profound interest in and connection to the Old Testament. The exhibition paints a portrait of a politician and president who worked for the inclusion of Jews as equals in America – a leader truly committed to “malice toward none.”

“With so many museum exhibitions focused on Lincoln, especially as we commemorate the sesquicentennial of the Civil War, the obvious question that arises in the wake of announcing a new exhibition on Lincoln is, ‘Is there anything new to convey?’” stated Dr. Louise Mirrer, President and CEO of the New-York Historical Society. “Indeed, the story of Lincoln and the Jews will be unknown to most visitors, and even to those who know something of it, the treasure trove of evidence they will find in this show regarding Lincoln’s profound sense of human equality will offer much that is new.”

Presented in collaboration with the Shapell Manuscript Foundation, the exhibition is premiering at the New-York Historical Society before traveling to the Abraham Lincoln Presidential Museum in Springfield, Illinois. The exhibition is guest curated by Dr. Ann Meyerson, independent museum curator, under the leadership of Benjamin Shapell. Harold Holzer, the Roger Hertog Fellow at the New-York Historical Society and chairman of the Abraham Lincoln Bicentennial Foundation, serves as Chief Historical Advisor.

Visitors to Lincoln and the Jews move chronologically through Lincoln’s life, beginning with items and documents from before his presidential inauguration and ending with his untimely death in 1865.

Lincoln’s relationship with Abraham Jonas, a Jewish member of the Illinois State Legislature whom Lincoln called “one of my most valued friends,” will be explored in the show, with an 1860 letter on view from Jonas that warns of an assassination plot before Lincoln’s first inauguration, rumors of which Jonas learned from his extended family in the South. Also on display is the illustration of a Hebrew flag that Abraham Kohn, a leader of the Jewish community in Chicago, bestowed upon then-president-elect Lincoln shortly before his departure from Springfield for his inauguration in Washington. Quoting the Book of Joshua, it urged Lincoln to “Be strong and of a good courage… Be not afraid, neither be thou dismayed; for the Lord thy God is with thee whithersoever thou goest.”

Lincoln often took unpopular stands in defense of Jews and Judaism, and the exhibition explores Lincoln’s two most important wartime interactions with the Jewish community. One was his role in amending the chaplaincy law so that Jews and other non-Christians might serve as chaplains; he also appointed the first-ever Jewish military chaplains in the United States. The other was his countermanding of General Ulysses S. Grant’s notorious General Orders No. 11 that expelled “Jews as a class” from the territory then under his command. Lincoln had the order revoked as soon as he learned of it, explaining that he did “not like to hear a class or nationality condemned on account of a few sinners.” Lincoln also supported the promotion and decoration of Jewish Civil War soldiers. On view in the exhibition will be dueling pistols presented to the Civil War hero Edward S. Salomon by the Citizens of Cook County, Illinois in 1867. Salomon led the so-called “Jewish Company” from Illinois and was commended for his battlefield bravery, exhibited at the Battle of Gettysburg and beyond.

In 1862, just as he was preparing to deliver the preliminary Emancipation Proclamation to his cabinet, Lincoln was treated by podiatrist Issachar Zacharie, who soon became a close confidant. Lincoln entrusted Zacharie with several secret missions, even sending him to New Orleans to promote pro-Union sentiments among his Jewish “countrymen.” Zacharie also worked to win Jewish voters to Lincoln’s side in the 1864 election. In return, when Savannah was restored to the Union, he sought Lincoln’s permission to visit his family there. In a remarkable 1865 letter bluntly titled “About Jews,” which is on view in the exhibition, Lincoln instructed Secretary of War Edwin Stanton to grant passage for Zacharie. He also ordered a hearing for a dismissed Jewish provost marshall (head of the military police) whom, he wrote, “has suffered for us & served us well.” In an era when anti-Semitism was commonplace, Lincoln openly sided with these Jews, against the advice of his Secretary of War.

• Toward Appomattox: The Last Gasp (April 8): A discussion with renowned authors and historians William C. Davis, James M. McPherson, and Harold Holzer will assess both the high cost of war and the debatable cost of peace.
• Lincoln’s Last Speech: Wartime Reconstruction and the Crisis of Reunion (April 14): A talk by Louis P. Masur, author and Distinguished Professor of American Studies and History at Rutgers University, will trace the evolution of Lincoln’s ideas and the debate over reconstruction policies during the war.
• Antebellum New York (May 19): Architectural historian Barry Lewis provides a look at the city in the decades leading up to the Civil War, as Abraham Lincoln and Robert E. Lee knew it, before the country was plunged into war.
• Lincoln and the Jews (June 2): Celebrated historian Jonathan D. Sarna, Joseph H. & Belle R. Braun Professor of American Jewish History at Brandeis University, discusses Lincoln’s remarkable relationship with American Jews and how it impacted his presidency, his policy decisions and, as a result, broadened America. Moderated by Harold Holzer.

The Shapell Manuscript Foundation is an independent educational organization dedicated to the collection and research of original manuscripts and historical documents. The Foundation’s focus is on the histories of the United States and the Holy Land, with emphasis on the 19th and 20th centuries. The collection includes original manuscripts and documents of leading political figures and world-renowned individuals such as American presidents, Mark Twain, Albert Einstein, Theodor Herzl, and more. For more information, visit www.shapell.org.

The New-York Historical Society, one of America’s pre-eminent cultural institutions, is dedicated to fostering research and presenting history and art exhibitions and public programs that reveal the dynamism of history and its influence on the world of today. Founded in 1804, New-York Historical has a mission to explore the richly layered history of New York City and State and the country, and to serve as a national forum for the discussion of issues surrounding the making and meaning of history.