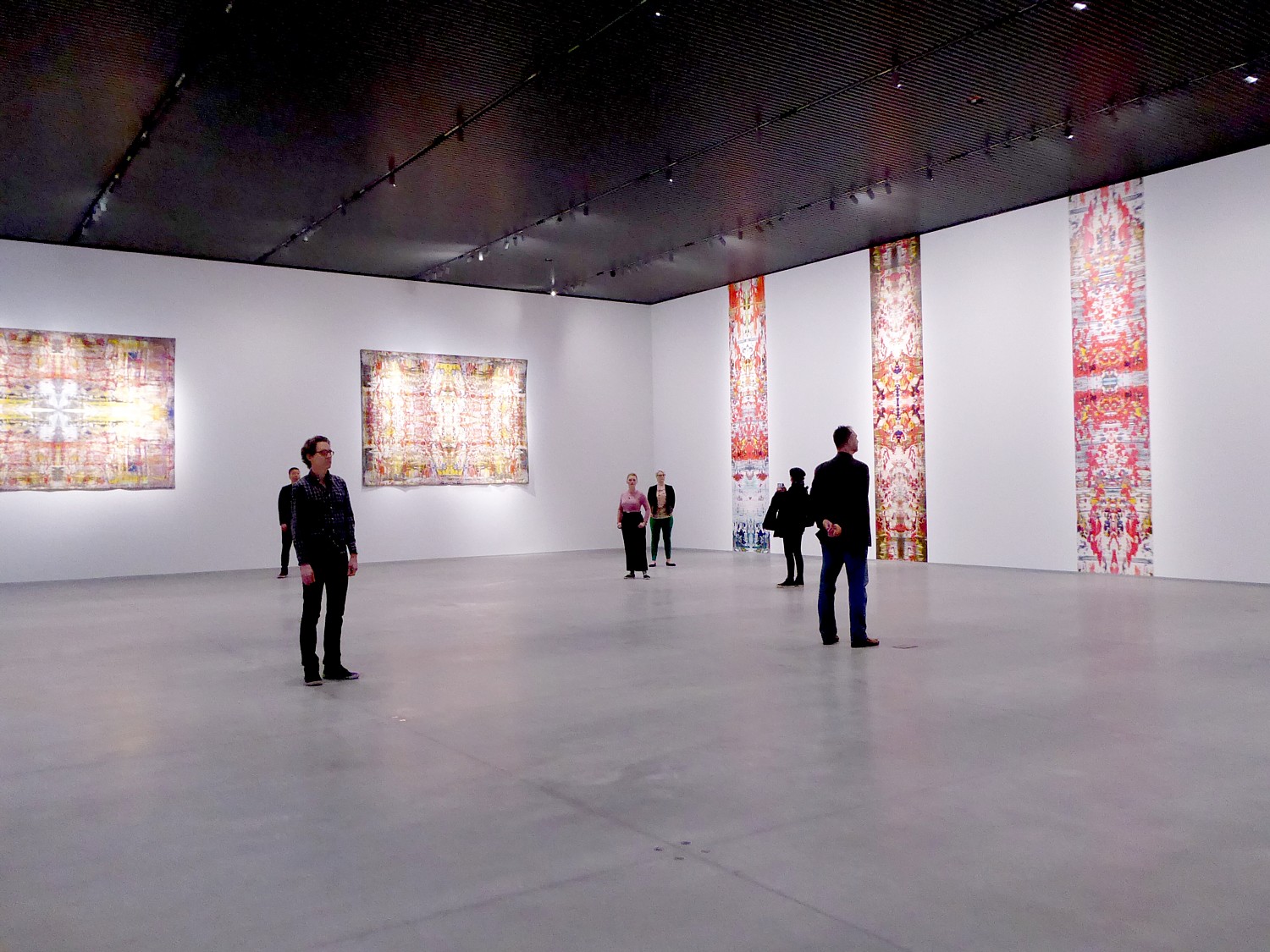 NEW YORK—The Shed, New York City’s new arts center that commissions, develops, and presents original works of art, across all disciplines, for all audiences, will open to the public on April 5 with the world premiere of Soundtrack of America. The five-night concert series, conceived and directed by Steve McQueen with a creative team led by Quincy Jones and Maureen Mahon, celebrates the unrivaled impact of African American music on contemporary culture with performances by a new generation of artists. A free live stream of the April 5 concert will be available on The Shed’s website, TheShed.org, and its social media channels.

The opening commissions continue on April 6 with new work by artist Trisha Donnelly and the world premiere of Reich Richter Pärt, an immersive live performance installation from iconic artists Steve Reich, Gerhard Richter, and Arvo Pärt, featuring new works by Richter and a new composition by Reich. The world premiere of Norma Jeane Baker of Troy, a specially commissioned spoken and sung dramatic work by poet and scholar Anne Carson, starring Ben Whishaw and Renée Fleming, directed by Katie Mitchell, will be performed on April 9 (with previews on April 6 and 7).

In development for more than a decade, The Shed is a nonprofit cultural institution located on city-owned land on West 30th Street between 10th and 11th Avenues on Manhattan’s west side, where the High Line meets Hudson Yards. It is housed in The Bloomberg Building—designed by Diller Scofidio + Renfro, Lead Architect, and Rockwell Group, Collaborating Architect–an innovative, movable structure that adapts to support new work of all kinds. The Shed’s primary program spaces include two floors of expansive galleries, the versatile 500-seat Griffin Theater, and The McCourt, a multiuse hall for large-scale performances, installations, and events for audiences ranging from 1,250 seated to more than 2,000 standing. A rehearsal space, lab for local artists, and event space are located in The Tisch Skylights on the top floor.

“As a commissioning home for artists from the worlds of performance, visual arts, and pop, The Shed is a place for all artists and all audiences to meet,” said Artistic Director and CEO Alex Poots.

Dan Doctoroff, Chair of The Shed’s Board of Directors said, “The Shed is doing something very different: a new idea of a cultural institution; an unprecedented building in a new part of the city; a new team commissioning all new work. It is uniquely of New York, dedicated to the pursuit of boundless artistic ambitions across all art forms for all audiences.”

Elizabeth Diller, of Diller Scofidio + Renfro, said, “Eleven years in the making, The Shed is opening its doors to the public as a perpetual work-in-progress. I see the building as an ‘architecture of infrastructure,’ all muscle, no fat, and responsive to the ever-changing needs of artists into a future we cannot predict. Success for me would mean that the building would stand up to challenges presented by artists, while challenging them back in a fruitful dialogue.”

David Rockwell, of Rockwell Group, said, “The Shed was conceived as an adaptable and structural palette that will allow an extraordinarily diverse group of creators and artists to incorporate the building into their work. After what has been a wildly satisfying collaboration, we are thrilled to hand The Shed over to the artists and audiences who will carry it forward. I couldn’t be prouder. It’s an exciting addition to the long lineage of institutions that have kept our city on the cutting edge of the arts. Ultimately, it is a testament to the energy of New York City.”

In recognition of a $25 million gift from Kenneth C. Griffin, The Shed announced earlier this week that its 11,700-square-foot, 500-seat theater has been named The Kenneth C. Griffin Theater. “The Shed will create new opportunities for artists and audiences to join together in unique experiences. Over a decade in the making, this space reflects New York’s determined commitment to fostering artistic expression and the idea that the arts should be accessible to everyone,” said Griffin. Including this gift, The Shed has raised $529 million toward its capital campaign goal of $550 million, which includes building costs, organizational start-up expenses, and support for the creation of new work.

Soundtrack of America, April 5–14, The McCourtConceived and directed by Turner Prize-winning artist and Oscar-winning filmmaker Steve McQueen and developed with music visionaries and academic experts including Quincy Jones, Maureen Mahon, Dion ‘No I.D.’ Wilson, Tunji Balogun, and Greg Phillinganes, Soundtrack of America is a five-night concert series celebrating the unrivaled impact of African American music on contemporary culture with performances by today’s most exciting emerging musicians.

The headline performers for Soundtrack of America are:

A free live stream of the April 5 concert will be available on The Shed’s website, TheShed.org, and its social media channels. Major support for Soundtrack of America is provided by the Ford Foundation.

An immersive live performance installation in The Shed’s galleries, Reich Richter Pärt explores the shared sensory language of visual art and music. Composer Steve Reich and artist Gerhard Richter will debut a world premiere commission, as two New York groups—Ensemble Signal and International Contemporary Ensemble—will alternate performances of Reich’s new score in counterpoint with Richter’s new work, including a new moving picture work created by Richter and filmmaker Corinna Belz. Each presentation of Reich Richter begins with a performance of Richter Pärt, a collaboration between Richter and Estonian composer Arvo Pärt. Two New York-based choirs—the Brooklyn Youth Chorus and the Choir of Trinity Wall Street—will sing Pärt’s music within an installation of Richter’s new work, in the form of tapestries and wallpaper. The Richter Pärt partnership builds on a concept originally developed by Alex Poots and The Shed’s senior program adviser Hans Ulrich Obrist for the Manchester International Festival in 2015. The Reich Richter composition and film were newly commissioned by The Shed as part of Reich Richter Pärt, and co-commissioned for a concert setting by The Los Angeles Philharmonic Association, Gustavo Dudamel, Music and Artistic Director; Cal Performances, University of California, Berkeley; Barbican Centre and Britten Sinfonia; Philharmonie de Paris; and Oslo Philharmonic.

New work by artist Trisha Donnelly. Norma Jeane Baker of Troy, April 6–May 19, The Griffin TheaterIn 1964, an office manager has hired one of his stenographers to type out his translation of Euripides’s Helen but his obsession with the recently dead Marilyn Monroe kidnaps the translation. Ben Whishaw and Renée Fleming star in this spoken and sung performance piece by poet, essayist, and scholar Anne Carson, directed by Katie Mitchell with music composed by Paul Clark. (Preview performances April 6 and 7; opens April 9).

IN FRONT OF ITSELF, ongoing, The Plaza

A large-scale, site-specific work by artist Lawrence Weiner is embedded in The Shed’s plaza, serving as a walkable outdoor area when the movable shell is nested over the fixed building, or as the base of The McCourt when the shell is extended to the east. The 20,000-square-foot work is titled IN FRONT OF ITSELF and features the phrase in 12-foot-high letters fabricated with custom paving stones.

When deployed, The Shed’s telescoping outer shell creates a 17,000-square-foot (1,600 m2), light-, sound-, and temperature-controlled space, The McCourt, named in recognition of Shed Board Member Frank McCourt, Jr., and his family. The space can accommodate an audience of approximately 1,250 seated or more than 2,000 standing. Large operable doors on its north and east sides allow The McCourt to function as an open-air pavilion. When the shell is nested over the base building, the 20,000-square-foot (1860 m2) Plaza will be open public space that also can be used for outdoor exhibitions and events.

The Shed features two expansive and flexible, column-free galleries on Levels 2 and 4 of the base building, totaling more than 25,000 square feet (2,340 m2) of museum-quality space with 19-foot-high (6 m) ceilings. Operable east-side walls can conjoin the galleries with The McCourt to accommodate space or seating needs for large-scale installations and performances.

An 11,700-square-foot (1,080 m2), sound-isolated black box space on Level 6, The Kenneth C. Griffin Theater, can be used as a single large theater with 500 seats or subdivided into two smaller theaters that can host concurrent events.

Björk’s Cornucopia, the multidisciplinary artist’s most elaborate staged concert to date, directed by Lucrecia Martel (May 6–June 1, The McCourt).

Art and Civil Disobedience with Boots Riley, a one-night-only lecture by the director of Sorry to Bother You in conjunction with The Shed’s DIS OBEY program (May 10, The McCourt).

POWERPLAY, a women-centered celebration of radical art and healing, created by multimedia artist LATASHÁ in collaboration with special guest artists including Nona Hendryx and Ashley August and participants in The Shed’s DIS OBEY program for NYC high school students, which explores themes of civil disobedience through poetry (May 18 and 19, The McCourt).

Open Call, an unprecedented opportunity for 52 New York City-based emerging artists and collectives to develop and showcase their work throughout The Shed’s primary spaces, free to the public (May 30–August 25, and continuing in 2020, Level 2 Gallery, The Griffin Theater, The Plaza).

Collision/Coalition, a series of three distinct commissions with intersecting themes on the nature of historic, present, and future collaborations between antithetical forces. Artist Oscar Murillo will create a new body of work using Diego Rivera’s famed, and destroyed, murals at Rockefeller Center as his starting point. Tony Cokes will explore the relationship between artist, studio, and gentrification. And the third, a new documentary by Yanina Valdivieso and Vanessa Bergonzoli on Beatriz González’s monumental public artwork Auras Anonimas—now under threat of being demolished by Bogotá’s city administration. Organized by Emma Enderby, Senior Curator (June 19–August 25, Level 4 Gallery).

Agnes Denes: Absolutes and Intermediates, the most comprehensive survey of the artist in New York to date, featuring more than 130 works on paper, sculptures, and newly commissioned works for the exhibition. Organized by Emma Enderby, Senior Curator (October 9–January 2020, Level 2 and 4 Galleries).

William Forsythe: A Quiet Evening of Dance, featuring new and existing work by the inventive choreographer set to the sounds of music and the dancers’ breath (October 11–25, The Griffin Theater).

Mirrors and Memory, a collaboration on a new live production about memory between Joan Jonas and pianist Hélène Grimaud (November 2–9, The McCourt).

Requiem, a performance of Verdi’s Messa da Requiem by Teodor Currentzis and his orchestra and chorus musicAeterna, from Perm, Russia, in their North American debut, accompanied by a specially commissioned cinematic artwork of moving image by the late avant-garde filmmaker Jonas Mekas (November 19–24, The McCourt).

Cedric’s at The Shed

Opening to the public in mid-April, Cedric’s at The Shed is a new bar from Danny Meyer’s Union Square Hospitality Group. Located in the street-level Lobby at the West 30th Street entrance, Cedric’s serves a menu of daytime and evening fare including cocktails, craft beer, wine, and coffee, accompanied by shareable bites, sandwiches, and salads. Open Tuesday through Sunday from 11 am to midnight, Cedric’s draws on the creativity and inventive spirit of The Shed, offering a welcoming and casual experience for locals and visitors alike.

Tickets and Operating HoursAdmission to exhibitions at The Shed is $10, which includes entry to all exhibitions on view that day (admission is free for children and teens 18 years and under, and for Shed Members at the Builder level and above). Ticket prices for live productions vary by show. Tickets for the first half of the opening season (April–August 2019) are available now at TheShed.org and via phone at (646) 455-3494. Tickets for fall-winter programs will go on sale later this year. Exhibition hours are Sunday, Tuesday, and Wednesday from 11 am to 6 pm; Thursday, Friday, and Saturday from 11 am to 8 pm. Times for live productions vary by show.