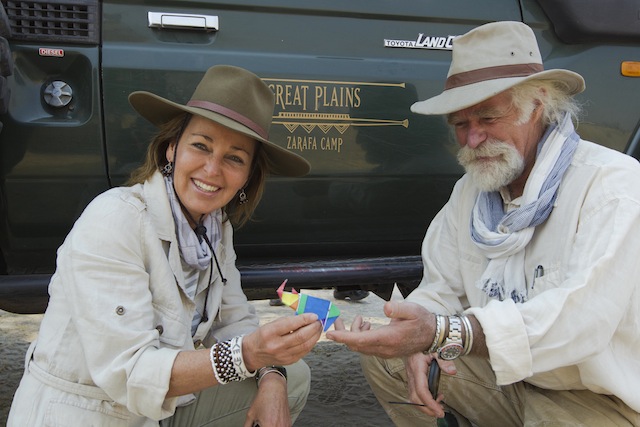 Wildlife filmmakers, conservationists and National Geographic Explorers–in–Residence Dereck & Beverly Joubert, who are at the forefront of this project, are getting into the spirit of the selfie campaign to raise money to relocate rhinos even from the wilderness in Botswana.

Great Plains Conservation and &Beyond have joined forces to translocate up to 100 rhinos from high poaching zones to safe havens within Botswana.

“It is a costly and challenging endeavor but we believe it is an urgent and necessary strategy to sustain this threatened species,” say Wildlife filmmakers, conservationists, CEO of Great Plains Conervation and National Geographic Explorers–in–Residence, Dereck & Beverly Jouber,

In order to raise the funds for the first 10 rhinos that will be moved early in 2015, they have created a crowd–funding campaign (http://www.trevolta.com/rhinos). Each donation earns you a gift, from wildlife films to fine art prints. A $1 donation earns a donor a rhino shaped origami template to create your own origami rhino.

“We are on a mission to create a global rhino origami army to raise awareness of the issues surrounding rhino poaching and the campaign.

Already photos have been coming in from around the world.”

Join in and post your origami rhino selfies from around the world, from Table Mountain in Cape Town to Times Square in New York and add the hashtag #RhinosWithoutBorders or #RhinoMove.

“The challenge is on and we’ll be on the lookout for the most extreme rhino selfies!

“So far the campaign has raised $184,187 but together we can continue to Make A Difference Now.”

To read CNN article on Rhinos Without Borders click here