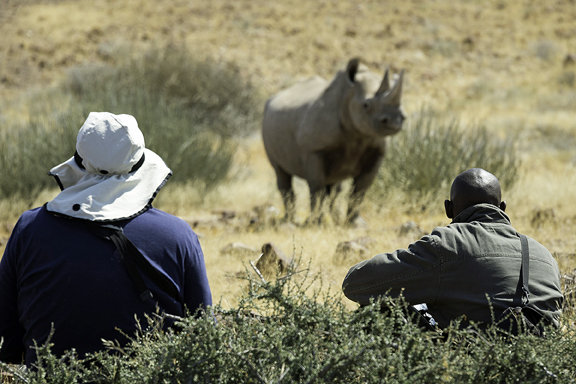 Namibia: In Search of the Desert Rhino, offered this fall and next, provides a chance to track this rare animal that survives in the Namib Desert, one of the harshest environments on Earth. The trip is the second in the “In Search Of” series developed by Nat Hab and WWF, which began in 2013 with “In Search of the Snow Leopard” in Mongolia.

Guests will travel alongside local researchers, WWF experts and personnel from Save the Rhino Trust, learning firsthand about crucial measures WWF has pioneered in tandem with local community groups to protect the desert rhino and other threatened species. With the support of the Namibian government, such efforts have made Namibia a global conservation leader.

“These are unprecedented opportunities to meet with experts that have been arranged specifically for this trip and are not included on any standard Namibia safari,” said Ben Bressler, founder and president of Nat Hab.

The desert rhino remains critically endangered because of rising demand for rhino horn, largely among Asian consumers who believe it has value in folk remedies; this has driven poaching to record levels.

Guests, limited to 12 per trip, will track the desert rhino and other desert-adapted species, including elephant, by vehicle and on foot throughout Namibia’s vast wilderness expanses. Varied habitats, from the arid wastes of Damaraland to the savannas and saltpans of Etosha, sustain a surprisingly diverse and vital wildlife population.

Private reserves, such as the Palmwag and Ongava concessions, are central to the experience. From the Ongava Reserve adjacent to popular Etosha National Park guests can view an abundance of wildlife without the presence of other visitors. Certain activities prohibited in national parks are offered as well, such as guided bush walks for an intimate perspective on the landscape and its wild inhabitants, and night drives in search of nocturnal animals.

One of Namibia’s top naturalist guides, Franco Morao, guides this special safari. A Namibia native, he has worked at camps and lodges throughout the country and holds a Level 3 national guiding certificate, the highest achievement possible in Namibia. In addition, as with all Nat Hab Expedition Leaders, Franco has received additional resources and training provided by WWF’s leading scientists, including those on the forefront of rhino conservation.

Guests travel in light aircraft, private mini vans, and top-of-the-line 4×4 safari vehicles with a window seat for each person. Flight transfers between destinations maximize time with wildlife. Accommodations are a highlight in their own right, with a focus on isolated, small-scale luxury camps featuring spacious individual tents with private verandas for secluded viewing.

Nat Hab and WWF have been working together since 2003 to provide conservation travel adventures exemplified by the “In Search Of” series.

“Twelve clients signed up for the first exploratory trip, and together with some of the world’s foremost snow leopard experts they journeyed to the far-western edge of Mongolia to visit two national parks where WWF Mongolia is performing important snow leopard research. Our guests were so moved by the experience that they came home and raised more than $20,000 for further snow leopard research in the region,” said Bressler, who hopes that this trip will similarly raise awareness about the black rhinoceros.

Natural Habitat Adventures is a world leader in responsible adventure travel and nature-based ecotourism. Since its founding in 1985, the company has offered eco-conscious expeditions and wildlife-focused small-group tours to the planet’s most remarkable nature destinations. Inspired and created from years of scouring the planet for the singular and extraordinary, Nat Hab’s itineraries are artfully crafted experiences that are far from “typical.” Trips are guided by professional naturalist Expedition Leaders, and Nat Hab enjoys a longstanding reputation for hiring some of the world’s best guides. Conservation is at the forefront of everything NHA does, and its philosophy is simple: tourism must work with and benefit local communities, which will in turn find value in protecting natural resources and wildlife. NHA is proud to be the travel partner of World Wildlife Fund, sharing a mutual commitment to travel as a means of helping to protect the world’s wondrous natural places.

For trip information, descriptive itineraries, date availability and reservations, call 800.543.8917 or visit http://www.nathab.com/. Click HERE to order a copy of the 2015 catalog.

Like Loading...
« Touring the Atacama Desert for the Best Stargazing on the Planet
African Bicycle/Train Safari Offers Unique View of Namibian Conservation Efforts »