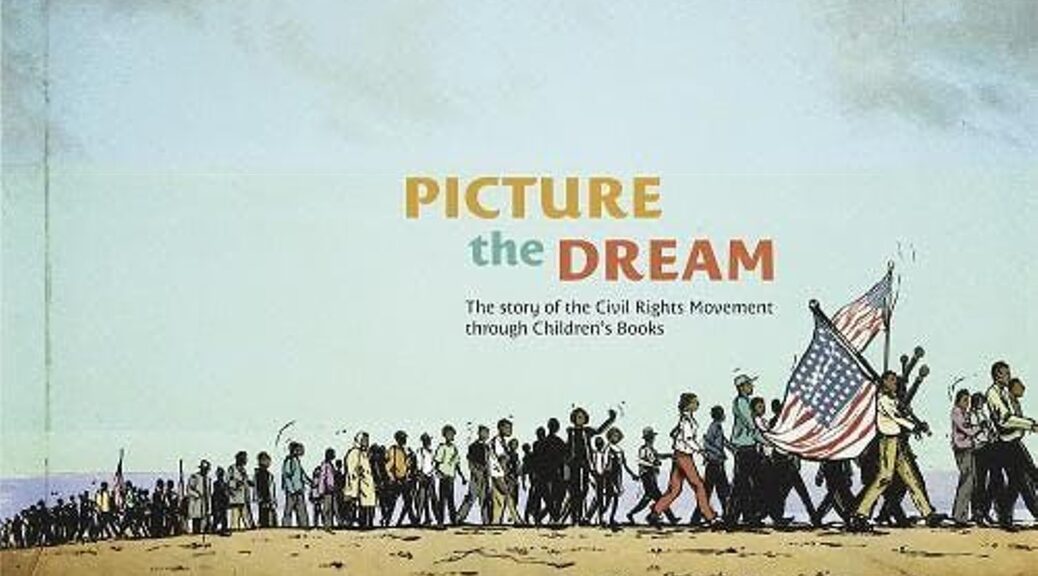 NEW YORK– The New-York Historical Society, New York’s first museum, presents an exhibition that explores the civil rights movement through one of the most emotionally compelling forms of visual expression—the children’s picture book. Picture the Dream: The Story of the Civil Rights Movement through Children’s Books, on view April 1 – July 24, 2022, highlights some of the most consequential moments in American history that continue to impact the nation today. Through illustrations and objects, the exhibition traces the legacy of social justice, thoughtfully presented for young audiences, and provides a jumping off point for important conversations about race, justice, and America’s past. The exhibition is co-organized by the High Museum of Art, Atlanta, where it debuted in August 2020, and The Eric Carle Museum of Picture Book Art, Amherst, Massachusetts.

“We’re so pleased to welcome Picture the Dream: The Story of the Civil Rights Movement through Children’s Books to New York so that our audience can gain a powerful new perspective on the long march towards social justice,” said Dr. Louise Mirrer, president and CEO of New-York Historical. “By showing how the civil rights movement has been interpreted for children throughout the decades, the exhibition demonstrates the important role young people have played and highlights the influential figures and moments that are working towards moving our society forward.”

“Through an immersive tapestry of images and ideas, the artworks in Picture the Dream: The Story of the Civil Rights Movement through Children’s Books take viewers by the hand and guide them through times of bravery and triumph,” said New York Times bestselling author Andrea Davis Pinkney, the exhibition’s curator and award-winning children’s book creator. “It’s an honor to collaborate on this experience that delivers a front-row seat to the dramatic events that continue to shape our world.”

The exhibition gives a comprehensive view of American history, explored through titles by established children’s book authors and artists as well as talented newcomers. Among the important historical moments highlighted: Rosa Parks’ refusal to give up her seat on a segregated bus in Montgomery, Alabama; Ruby Bridges becoming the first Black student to desegregate the all-white William Frantz Elementary School in 1960; Barack Obama’s swearing in as president in 2009; and the Black Lives Matter protests. Supplemented with historical items, the exhibition also emphasizes children’s roles as activists and the powerful role they have played in civil rights movements throughout history. A short documentary film, historical footage, and a series of compelling interviews with authors, illustrators, and activists provide context and an in-depth look at the faces of the movement as well as the artists who visualize history in the pages of picture books.

Given the controversy of how such issues as race and slavery are treated in children’s books – going as far as to ban certain books from schools – the exhibit is especially timely. Asked about the controversy, the museum distinguished between politics and history:

“For almost two decades, ‘History Matters’ has been New-York Historical’s motto and an essential part of its mission. With this new exhibition, we show that history continues to matter,” the museum stated. “New-York Historical along with the artists and authors featured in this show persist in telling these great historical stories even as our children’s education is scrutinized by those seeking to avoid difficult conversations. This exhibition traces the legacy of social justice thoughtfully presented for young audiences, and provides a jumping off point for important conversations about race, justice, and America’s past.”

The exhibition has been in the works to come to New-York Historical since August 2020 after it debuted at the High Museum. “It comes from trusted partners and was previously on view in Atlanta, Georgia and Amherst, Massachusetts, it is at its core a history show that centers the experiences of kids, and it tackles tough history in age-appropriate and challenging ways. All of this is in alignment with New-York Historical’s mission to bring history to the widest possible audience.”

The exhibit features original artworks, plus related objects and images from New-York Historical’s collection.A reading nook is also available for visitors to read the books from which the illustrations are taken.

Special to New-York Historical’s presentation are a historical timeline and artifacts from the Museum’s History Responds collection, including drawings by artists and children inspired by the Black Lives Matter movement, and objects from the Gilder Lehrman Institute of American History. The gallery also features a reading nook with books featured in the exhibition available for visitors’ enjoyment.

Picture the Dream: The Story of the Civil Rights Movement through Children’s Books is curated by award-winning children’s book author Andrea Davis Pinkney, and is coordinated at New-York Historical by Alice Stevenson, vice president and director of the DiMenna Children’s History Museum, and Alexandra Krueger, manager of museum affairs.

The exhibition’s curator, Andrea Davis Pickney, chose the books featured in the exhibition, with the intent to include those currently in print so that children would have the opportunity to read them. Notably, no changes were made to the selections based on the controversy over book banning, the museum said.

Among the books featured in the exhibition are:

Throughout the exhibition, a variety of family and education programs are planned. In April, families are invited to take part in online and in-person story times featuring books from Picture the Dream during Little New-Yorkers and Sunday Story Time. Among the books to be read are Our Children Can Soar: A Celebration of Rosa, Barack, and the Pioneers of Change, written by Michelle Cook and illustrated by 13 different award winning illustrators; All Because You Matter by Tami Charles and illustrated by Bryan Collier; Let the Children March by Monica Clark-Robinson and illustrated by Frank Morrison; A Sweet Smell of Roses by Angela Johnson and illustrated by Eric Velasquez; and Change Sings: A Children’s Anthem by Amanda Gorman and illustrated by Loren Long. Additional details about these and other children’s programs are available online.

Open House Teacher Appreciation Day takes place on Saturday, May 14, and includes story times throughout the day along with a drop-in craft for any families at the Museum. Educators can learn more and register here.

Major support for New-York Historical’s presentation of Picture the Dream: The Story of the Civil Rights Movement through Children’s Books is provided by the May and Samuel Rudin Family Foundation. Additional support provided by New-York Historical’s Frederick Douglass Council. Exhibitions at New-York Historical are made possible by Dr. Agnes Hsu-Tang and Oscar Tang, the Saunders Trust for American History, the Evelyn & Seymour Neuman Fund, the New York City Department of Cultural Affairs in partnership with the City Council, and the New York State Council on the Arts with the support of the Office of the Governor and the New York State Legislature. WNET is the media sponsor.

At the New-York Historical Society, New York’s first museum, you can experience 400 years of history through groundbreaking exhibitions, immersive films, and thought-provoking conversations among renowned historians and public figures. A great destination for history since 1804, the Museum and the Patricia D. Klingenstein Library convey the stories of the city and nation’s diverse populations, expanding our understanding of who we are as Americans and how we came to be.

Ever-rising to the challenge of bringing little or unknown histories to light, New-York Historical will soon inaugurate a new annex housing its Academy for American Democracy as well as the American LGBTQ+ Museum. These latest efforts to help forge the future by documenting the past join New-York Historical’s DiMenna Children’s History Museum and Center for Women’s History. Digital exhibitions, apps, and our For the Ages podcast make it possible for visitors everywhere to dive more deeply into history.